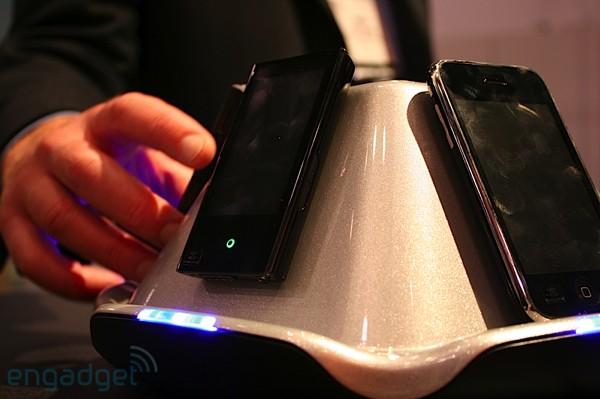 It was just a short year ago that we went to Fulton Innovation's tiny booth at CES and failed to get a working wireless power demo, but a lot's happened since then -- the company is at CES 2009 in force, with a much larger, swanker booth, partners like Energizer and Motorola demoing working products, and tons of working real-world examples of the tech in action. We were particularly taken with the modded Dish DVR that automatically turned itself on and off when the remote was placed on top of it to charge up -- oh, and the remote featured super-capacitors instead of batteries that charge fully in 10 seconds. There were also a ton of cell phones (including a modded iPhone, of course), new cooking demos featuring a blender, and a super cool Leggett & Pratt power tool charging workbench. Extremely impressive, all in all -- we're starting to think that 2009 could be the year that wireless power could really take off. Gallery below, video after the break!

P.S.- We asked if Fulton had anything to do with the Palm Pre's sexy Touchstone wireless charger, but the guys in the booth didn't know. We'll let you know if we find anything out.

In this article: ces, ces 2009, Ces2009, ces2009video, ecoupled, energizer, featured, features, fulton innovation, FultonInnovation, motorola, wireless power, WirelessPower
All products recommended by Engadget are selected by our editorial team, independent of our parent company. Some of our stories include affiliate links. If you buy something through one of these links, we may earn an affiliate commission.
Share
Tweet
Share