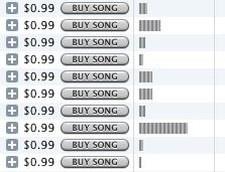 You knew this was coming. The iTunes pricing changes announced at Macworld got groans from most of us watching (even though I'm pretty sure it's more or less agreed that it had to happen sooner or later), but the record companies are taking time to do a little bit of gloating over the fact that they've finally broken through Apple's 99 cent barrier. They told the AP that the move means that customers aren't "price sensitive" -- in other words, we're OK with paying more for music.

I don't know that that's true -- iTunes has had 99 cent songs since its inception, and even with the record companies crying and whining the whole time, it's been an amazing success. But prices go up eventually, no matter what product you're talking about, and if Apple had to raise prices, they could do a lot worse than adding a tier above and a tier below. Of course the record companies will want to put anything that sells on the top tier, but I don't think they can use that as evidence that consumers don't care what price they pay for music.

And let's keep in mind that at $1.29 a song, a 10-song album at $12.99 is still cheaper than the $16 and $17 record companies used to try and charge. There's no question about it -- this latest change is one in favor of the record companies, but a system like iTunes still seems worlds better for consumers than the old Sam Goody/Tower Records retail store system.

In this article: apple, downloadable-music, itunes, itunes-plus, music, prices, pricing, record-company
All products recommended by Engadget are selected by our editorial team, independent of our parent company. Some of our stories include affiliate links. If you buy something through one of these links, we may earn an affiliate commission.
Share
Tweet
Share