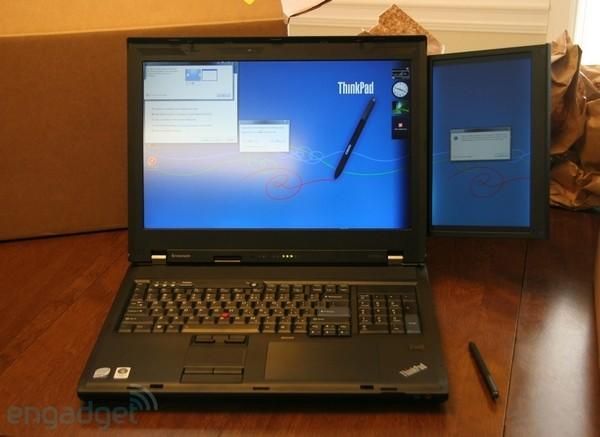 Lenovo's W700ds stands out from the rest in an incredibly crowded laptop market -- and not just because it's bigger than almost any two of its competitors combined. It's one of the very few laptops to offer an auxiliary display and has room for a full number pad and an integrated tablet to boot. With those two screens and that pop-out stylus it's a little bit like a Nintendo DS that entered the Major Leagues and spent a few decades on the juice chasing home run records -- but, being a Lenovo, this luggable has little interest in games. It's powerful and very functional, but bulky dimensions and a similarly unwieldy price tag leave it with two major handicaps to overcome. Naturally the first thing you notice about the W700ds is its size -- for a "portable" computer it is massive. At 11 pounds and a full 2.1 inches thick it's over two pounds heavier and a half-inch deeper than its predecessor, the mono-screened W700. Since you're unlikely to make it long on battery power (the nine-cell unit managed a measly two hours and some change in our tests), travelers will need to factor in the weight of the machine's power brick, which at two pounds is itself heavier than many netbooks we've tested. The result is a package you won't want to carry far but also doesn't feel particularly grounded on a desktop. The bulky screen necessitates tight hinges for support and, despite that big battery in the bottom, makes everything seem top-heavy when open, feeling like a wayward nudge would send the machine toppling over.

But, for all its messenger bag-busting, disc-herniating, awe-inspiring size and heft, it is an impressive machine to behold. The keyboard is expansive to say the least, featuring a full number pad to the right and a proper complement of Function keys along the top. The dedicated number pad is handy, but its presence shifts the main keyboard off to one side, making you feel somewhat askew when typing. Pop open the auxiliary display and things feel even more off-center as the keyboard is on the left and the extra desktop on the right. Having that secondary display on the other side would seemingly result in a more balanced layout -- and perhaps a better flow of qi if you're into that sort of thing.

On the right is an 8x DVD±R, though a Blu-ray recorder is an option if your wallet is bursting, and on the left you can configure dual ExpressCard slots (one 54mm and one 34mm), a Smart Card and an ExpressCard slot, or a Compact Flash and 34mm ExpressCard slot, which is how ours was delivered. 801.11b/g comes standard, while a/g/n is optional, as is WiMAX.

There are three separate means to control the cursor: pointing stick, touchpad, and Wacom tablet. The touchpad is surprisingly small given the size of everything else, measuring 1.5-inches tall and just over 3-inches on the diagonal. It feels rather cramped and definitely wasn't our input of choice. The pointing stick, with a fat, grippy cover falls to hand (or finger) more readily, and then of course there's the tablet. It is thankfully much larger than the trackpad, but is a bit down-sized compared to most dedicated units, measuring 5.1- x 3.2-inches. This, too, feels poorly located; most digitizer users place their tablets to the right of their keyboards, but this one's position, below the keyboard and to the right of the touch-pad, makes sketching somewhat uncomfortable unless you tilt the whole laptop to the right. Casual users likely won't be too bothered, but those who switch from stylus to keyboard frequently won't enjoy this arrangement.

Just above the tablet is a Pantone calibration sensor (a $70 option) that enables the W700ds to give accurate color representation without sticking sensors on the screen or squinting through cellophane glasses at color bars. Just launch an included app, close the lid, and then twiddle your thumbs for about 30 seconds as the laptop goes into rave mode, emitting curious flashing lights and discordant beeps. When through, open the lid again to enjoy a fully calibrated (and totally chilled out) screen. It's like magic. Naturally you can't enjoy a rave without speakers, and the W700ds has decent ones hidden beneath a grill above the keyboard. At full-blast they're loud enough to hear across a room, but sound rather distorted at that level. At lower levels they sound good enough, not fantastically good but better than your average laptop. And, having dedicated volume and mute buttons is a nice touch, meaning you can blast the jams and mute the lame tunes without having to remember any keyboard combinations. For those who prefer to not annoy their neighbors, a headphone jack is easily accessed on the front-right.

Pulling the hidden stylus from the right side of the machine is a neat trick, but it's the that auxiliary 10.6-inch display also hidden on the right that makes this laptop truly notable. It's oriented in portrait mode and curiously offers a higher vertical resolution than the primary display's 1920 x 1200, with its own coming in at 768 x 1280, leaving you with an unseemly 80 pixel black bar along the bottom. A quick press on the side of the display and it pops out, manually sliding the rest of the way and then swiveling inward or outward to face you. Sadly when extended the laptop disables any external displays, which could be rather limiting for anyone looking to enter the ménage à desktop scene.

In terms of the quality of the screens the primary, 17-inch panel is quite impressive, one of the best we've seen on a laptop. With plenty of pixels (2,304,000 of them) it provides all the real-estate that you'd typically need and gives a bright, colorful picture. It's not quite up to par with a high-end desktop LCD, particularly when it comes to viewing angles (which are good, but not great), but it isn't far off and is far more portable. Meanwhile, the trick auxiliary display can't compare thanks to its even more restricted viewing angles and overall dull look -- thanks in no small part to its proximity to the far superior main display.

However, the intent for this desktop extension is for things like floating toolbars in photo editing apps, chat windows, and lengthy media playlists. For those purposes high contrast ratios don't really matter and the portrait layout, useless for many tasks, is appropriate. We might have liked to see slightly higher quality from this much anticipated extension, but ultimately it works well as-is.

The W700ds we received to test sports an Intel Core 2 Extreme QX9300 processor with quad cores spinning at 2.53GHz and 12MB of L2 cache, but those building their own have the option of a 2.8GHz Core 2 Duo T9600 or a 3.06GHz X9100, which has a faster clock speed but half the cache of our QX9300. This one has 4GB of DDR3 memory, but the model is offered with anywhere from 2 up to 8GB. An NVIDIA FX 3700M GPU with 1GB of dedicated memory handles the pixels, but you can save $400 by going for an FX2700 with 512MB. Finally this model has 460GB of storage spread across two disks, the maximum config, but Lenovo's happy to sell you just a single 160GB disk if you please. All this is supported by a hefty 9 cell battery that, as mentioned above, manages to eke out just over two hours before expiring.

We ran a performance test in 3DMark Vantage and scored 4,994, 9,945 on the CPU side and 4,283 for the GPU. Those aren't stellar scores but are nevertheless quite good for a laptop, especially that CPU rating. The system came with Vista Ultimate, which boots in just over a minute and logs in quickly with a swipe (or two) of a finger. Once there, apps load and respond promptly, as you'd expect with this kind of firepower beneath your fingertips.

Lenovo's W700ds is a monster machine for sure; a freakish implementation of a power-user's wishlist created with little regard for practical concerns like portability or cost. If you'd like to buy a model a configuration like ours, according to current prices at Lenovo.com you'd be looking at a charge of $5,419 -- not small change on anyone's budget. You can get yourself into one of these for just over $3,000 if you can avoid clicking on any of those oh-so tempting options, but that's always a bit depressing.

So, if you need a machine with a lot of horsepower and find yourself moving around enough that a desktop isn't practical -- but then again don't move so much that you'd need to pick this up more than once a day -- this is the device for you. However, if you don't fit into that incredibly small niche of a niche then you'd be well advised to move along. There are plenty of other more general-purpose solutions that are smaller, lighter, and, perhaps most importantly, cheaper.

In this article: feature, featured, features, laptop, lenovo, lenovo w700ds, LenovoW700ds, review, w700ds
All products recommended by Engadget are selected by our editorial team, independent of our parent company. Some of our stories include affiliate links. If you buy something through one of these links, we may earn an affiliate commission.