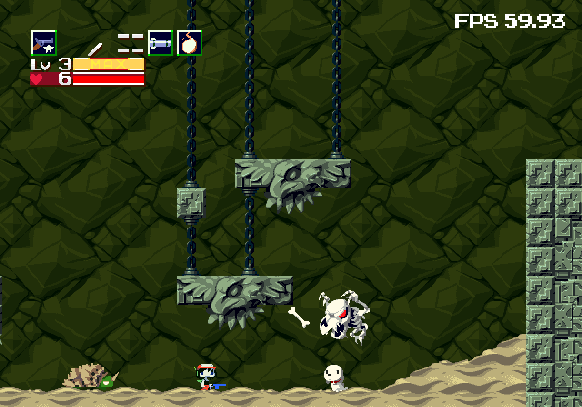 Ah, now this is what the new site design is all about: the ability to post jaw-droppingly gorgeous Cave Story screens at near-full resolution. (To see it in fully full resolution, click on the image!)

This latest screen of the WiiWare version of Pixel's delightful game, posted on developer Nicalis's site, features new sprites for two of the game's creatures: a puppy, and ... that skeleton thing, which we bet has a name. (According to the leading Cave Story fansite, it is called a "Skeleton".)

In the accompanying post, programmer "Tiffany" says the game is "close to done", hints at some secret Wii stuff (the DLC, or possibly even more), and says something that should be the cause of relief among the entire Cave Story fan community: "One of the more obvious bugs from the initial port was a notable sound bug – you know "bleeding ears" and all–which I am currently working on. We promise to get it right!" They're going to get it right.

0
In this article: cave-story, nicalis, pixel, platformer, remake
All products recommended by Engadget are selected by our editorial team, independent of our parent company. Some of our stories include affiliate links. If you buy something through one of these links, we may earn an affiliate commission.
Share
Tweet
Share