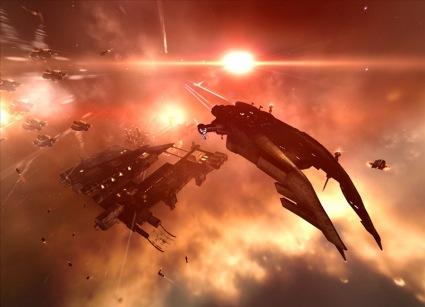 The EVE Online starbase exploit revealed in December has had a far-reaching impact on the game. Certain player-owned starbases in EVE were producing valuable, high-end materials that they shouldn't have been. Once a group of players picked up on this, they exploited the game on a massive scale, resulting in trillions of ISK (Interstellar Kredits, the game's virtual currency) that never should have existed being injected into the game. To date, this is the largest economic manipulation (via an exploit) ever revealed in EVE Online.

The starbase exploit was the first of several player-triggered drama bombs that hit the game in recent weeks, and resulted in a substantial amount of (in-game) market turmoil and player outcry over the issue. The game's subscribers wanted openness on the matter from EVE's developer, CCP Games, and they've certainly got that as of today. CCP Games posted the results of the exploit investigation, and the caveat "be careful what you wish for" may apply here, given the depth and complexity of the findings conveyed to the playerbase in today's dev blog, "War Makes Thieves and Peace Hangs Them."


This dev blog stands as an extremely thorough analysis of the starbase exploit and its effects on the game itself, from how player-owned stations (POS) work and why the exploit was so significant, to full disclosure on the economic ripples it's created in the game's setting of New Eden.

It's ultimately a presentation of the collective findings of several different departments within CCP Games and which is, quite frankly, beyond the scope of this post at Massively. What we offer up here is a rather basic summary of a complex issue, as "War Makes Thieves and Peace Hangs Them" exposes the nuts and bolts of the underlying game mechanics in a way this writer has never observed before from this particular developer.

CCP Games explains the scenario from the ground up, detailing the POS game mechanics for those unfamiliar with the industrial side of the game, and pointing out how the POS exploit worked. There's a fair amount of complexity to the issue but it's presented in a way that most players should be able to grasp, more or less, even if industry isn't your thing.

Once the developers figured out why certain starbases in the game were accruing materials they shouldn't have, they zeroed in on which ones were being used in the exploit and moved to eliminate them. EVE developer CCP Grimmi states: "The opening action on our part regarding the exploit included the total destruction of all the POS complexes involved. This entailed flying to each one and basically nuking everything in sight -- a fireworks show of epic proportions but with no witnesses except the GMs in the demolition team."

The aftermath of the exploit revelation has been an amalgam of account bans and some degree of economic fallout in the game. Effects have been felt by the game's playerbase in terms of Tech II production -- EVE's high-grade ships and modules put to use by those with higher degrees of skill than newer players. There have been some less obvious ancillary effects on the game as well, such as the negative impact on EVE's booster (drug) trade.

CCP Games lead economist Dr. EyjoG provides an exhaustive account of the impact of the exploit on EVE's market from 2005 right up until the exploit was revealed and subsequently dealt with. Most importantly, the dev blog explains what actions were taken against the exploiters (who have not been named by CCP and are not likely to be named and shamed in the future).

CCP discovered that over 200 reactors were being used to harvest materials which should not have existed. An estimated figure of how big the exploit has been places it at a staggering 6.7 trillion ISK. But that's just the ISK value of the exploit itself. The ISK put to use over the years actually changes the estimate, giving it an upper limit of roughly 12 trillion ISK.

Dr. EyjoG adds: "But putting that into some kind of perspective is necessary. On a daily basis the total trade on the EVE market (not counting contracts or direct trade) in 2008 was between 2.5 and 3.0 trillion ISK. That gives us an annual trade worth more than 964 trillion in 2008 alone. So the maximum value of the exploit in 2008 is only about 0.7% of the total trade in one year."

The exploiters hid their tracks by engaging in the trade of high-end items and minerals, which prompted EVE developer CCP Diagoras to address player concerns that guilty parties found a way to evade detection and avoid punishment. Specifically, CCP Diagoras addressed the concern players had that once the exploit was discovered, players could have begun taking down their starbases in order to avoid detection. CCP Games used a database backup to assess the situation as it was roughly a week before the exploit was revealed.

The POS exploit in question is viewed by CCP as a "duping exploit" under their Suspension and Ban policy, and the players involved have been punished accordingly: permanent bans for those directly involved, removal of items and currency from those who benefitted from the exploit.

There were seven corporations in total (directly) involved with the exploit, for different purposes. Two of them were involved in real money trading (RMT) -- selling ISK to other players for real money -- while others used their ISK proceeds to fuel their in-game activities. Some valuable items in New Eden were removed from the game, including motherships and titans (EVE's superweapons) and over 30 Tech II blueprint originals (BPOs), not to mention vast amounts of ISK.

Given how involved in the game EVE players tend to be, concerns have been voiced by subscribers whether or not CCP knew about the exploit and did nothing to fix it, with the most outspoken players wondering if CCP employees themselves were involved. The company operates an Internal Affairs department that investigates such allegations, and concludes that no CCP employee -- or member of the player-elected representatives, the Council of Stellar Management (CSM) -- were involved in the exploit.

The fact that this exploit was able to exist for so long has forced CCP Games to re-evaluate their systems for detecting issues like this, and they're overhauling their bug reporting tools and company procedures to ensure an issue on this magnitude cannot occur again. CCP's findings are presently being discussed by the players themselves on the game's official forums and on the Scrapheap Challenge (unofficial) forums as well.

In this article: boosters, breaking, ccp-diagoras, ccp-games, ccp-grimmi, ccp-lilith, cheating, council-of-stellar-management, crafting, dev-blog, duping, economy, eve, eve-online, exploit, exploits, eyjolfur-gudmundsson, game-mechanics, internal-affairs, isk, mmo-industry, moon-mining, pos-exploit, sci-fi, starbase-exploit, titans
All products recommended by Engadget are selected by our editorial team, independent of our parent company. Some of our stories include affiliate links. If you buy something through one of these links, we may earn an affiliate commission.
Share
Tweet
Share