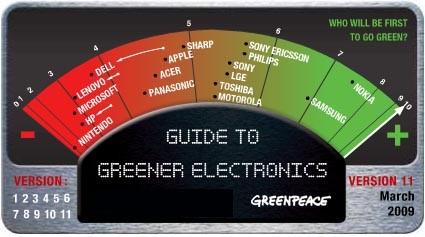 HP, Lenovo, and Dell haven't fared too badly in some of Greenpeace's previous e-waste reports, but it looks like three companies have fallen well short of the organization's expectations this time around, with each getting called out for failing to live up to their promises. Specifically, all three had said that they would eliminate vinyl plastic (PVC) and brominated flame retardants (BFRs) in their products by the end of this year, but they've now apparently told Greenpeace that they won't be able to meet that timeline, and only Lenovo has come forward set a new deadline (the end of 2010). The big winner, on the other hand, is Philips, which has jumped from 15th place to 4th as a result of some new recycling initiatives, prompted at least in part by public pressure. And, as you can see above, Nintendo is once again dead last, although we're pretty sure that's simply a result of sheer mass at this point.
In this article: dell, e-waste, greenpeace, guide to greener electronics, GuideToGreenerElectronics, hp, lenovo, nintendo, philips
All products recommended by Engadget are selected by our editorial team, independent of our parent company. Some of our stories include affiliate links. If you buy something through one of these links, we may earn an affiliate commission.
Share
Tweet
Share