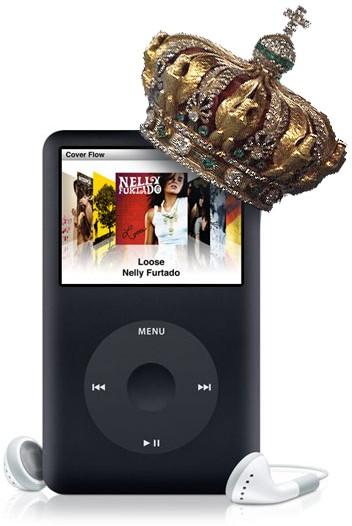 No, this isn't an April Fool's joke. President Obama met today at Buckingham Palace with the Queen, and our forward thinking commander-in-chief brought along a little tech for gifting purposes. Obama presented Elizabeth II with an iPod containing video from her 2007 visit to the States. In return, the first family received what is apparently a standard present for visiting dignitaries to the Palace -- a silver-framed photo of the Queen and her husband. At a glance, it seems like Obama has a thing for gadgets (and related media); he recently handed off a set of DVDs featuring classic American films to Prime Minister Gordon Brown... who was unable to play them due to incorrect region encoding. Regardless, the Queen appears pleased with the music player, telling the President during their 25 minute tea that she "Finally has something to listen to [her] Pantera records on."
In this article: apple, barack obama, BarackObama, buckingham palace, BuckinghamPalace, ipod, obama, politics, portable audio, portable video, portableaudio, portablevideo, president barack obama, president obama, PresidentBarackObama, PresidentObama, queen elizabeth, queen elizabeth II, queen of england, QueenElizabeth, QueenElizabethIi, QueenOfEngland
All products recommended by Engadget are selected by our editorial team, independent of our parent company. Some of our stories include affiliate links. If you buy something through one of these links, we may earn an affiliate commission.
Share
Tweet
Share