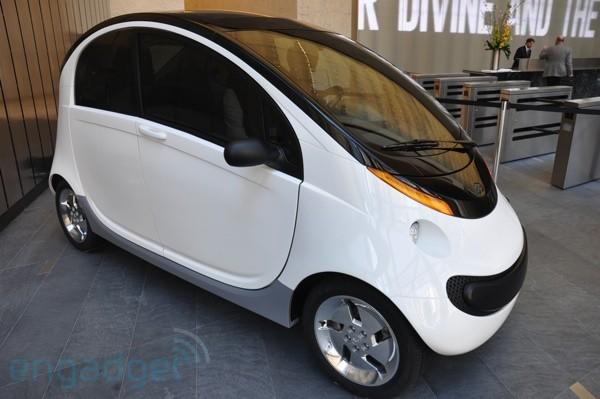 We just got an exclusive first look at the Peapod from Chrysler's Global Eco Mobility unit. Like its cousin the GEM, Peapod is a Neighborhood Electric Vehicle, which means it's limited by law to 25 mph and can't go on the highways. Peapod gets about 30 miles on a charge, and adds in all the "car" goodies that GEM was lacking. The vehicle seats four in lightweight Arion-inspired seats, has suicide doors for easy entry, a windowed roof that can be removed for some open-air driving, and even a nice amount of trunk space. On the dash there's an iPod dock and the instruments panel is a colorful collection of informations. We couldn't drive it around just yet -- it was stuck in a building lobby -- but we'll get a shot at taking this onto the city streets shortly. The Peapod should hit the streets in October, for the quite dramatic estimated pricetag of around $12,000. That's a pretty penny for something that can't top 25 mph, but at least this thing is a lot more likely than the P.U.M.A. to land in your driveway in the near future.

Update: We added some video, check it out after the break! In this article: chrysler, global eco mobility, GlobalEcoMobility, peapod
All products recommended by Engadget are selected by our editorial team, independent of our parent company. Some of our stories include affiliate links. If you buy something through one of these links, we may earn an affiliate commission.
Share
Tweet
Share