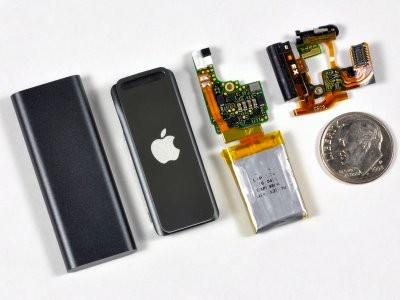 When iSuppli recently reported that the parts and packaging of the iPod Shuffle 3G cost only $21.77, a mere twenty-eight percent of the unit's retail price, PMP Today asked a most reasonable question: Where are the new Shuffle KIRFs? According to Business Week, Samsung is making a killing on these things, supplying not only the unit's ARM-based processor ($5.98), but the storage ($6) on at least a few of the units as well. The lithium ion battery, described by iSuppli as "the smallest we've ever seen," has an asking price of $1.20. As for things like capacitors and resistors, they're being described as "about the size of a grain of salt" and cost fractions of a penny each. Of course, none of this takes into account things like paying engineers and designers, and royalties paid to patents owned by other companies. Not that the KIRFsters of Shenzhen worry about these sorts of things. Maybe the wherewithal required to produce a phony Shuffle is (for the time being) beyond the capabilities of the pirates? Or maybe they're just having too much fun cranking out NOKLAs.

In this article: apple, arm, ipod shuffle, IpodShuffle, iSuppli, portable audio, portableaudio, samsung, shuffle, tear down, tear-down, TearDown
All products recommended by Engadget are selected by our editorial team, independent of our parent company. Some of our stories include affiliate links. If you buy something through one of these links, we may earn an affiliate commission.
Share
Tweet
Share