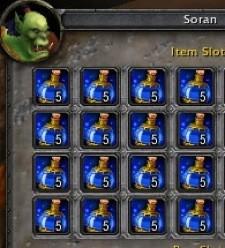 April's dealing with a problem that I've dealt with many times before: bank management. The other day I posted some tips on inventory management, but bank management is a knot that even I can't quite figure out how to untangle. On the one hand, bank space is supposed to be your refuge -- you can only pick things up out in the field as long as you have an empty inventory space for it. But on the other hand, especially on your main, you pick up a lot of things that seem important at the time -- tier gear, your first trinket, that piece you farmed for months until it finally dropped, that Blizzard Bear that you know is account bound, but you just can't bear to give it up. Stuff piles up after a while, and eventually you're carrying stuff around in your backpack that should really be sitting in your bank... and would be if you had room to keep it in there.

The only real tip I have is that you have to be ruthless -- you'll probably never use those trinkets again, that Tier 0 armor won't ever really be needed anymore, and you might as well eat those Delicious Chocolate Cakes that you made for a rainy day. You might as well use those cooking and profession mats you've got sitting around now, because if they aren't worth anything at the moment, they probably won't be worth any more in the future. And yes, I know you've only got so much Noggenfogger left, but you might as well go ahead and drink it on the next fun guild run. It sounds harsh, but in a game that's really about collecting, we all tend to have a packrat side.

And if worst comes to worst, just create yet another bank alt, charter yet another bank guild, and start filling those bags up also. With all of the junk we've got coming through, they'll probably be full to the brim in no time.

In this article: bank, bank-alt, bank-inventory, discussion, inventory, junk, management, mats, old-gear, packrat, packrat-tendencies, tier-0, tips, trinkets
All products recommended by Engadget are selected by our editorial team, independent of our parent company. Some of our stories include affiliate links. If you buy something through one of these links, we may earn an affiliate commission.
Share
Tweet
Share