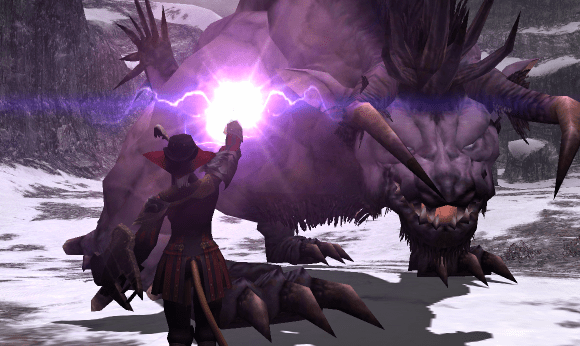 Prophecy, valor, campaign, and item augmentation, oh my! This latest version update was packed with goodies for the Final Fantasy XI player base, making sure that something for everyone was included in the game. I recently got the chance to sit down with the Final Fantasy XI team and play through some of the content, experiencing what their newest mini-expansion, A Crystalline Prophecy, had to add to the game.

Past that, I also had the chance to see the new Fields of Valor areas in action, aid the Mithras in defending Windurst from the beastmen during the Crystal War, and experience some of the hard tasks in the campaign missions first hand.

So does the April update get a thumbs up? Is Crystalline Prophecy worth the ten bucks? Those questions and more will be answered within.


And the storyline takes a turn back to where it began...

One of the first surprises that the team hit me with was the name of the writer for the three new mini-expansion for FFXI -- Masato Kato. Kato was the original writer of the missions in Final Fantasy XI and the Rise of the Zilart campaign, but is better known for his writing work on Xenogears, Chrono Trigger, and parts of Final Fantasy VII. He left Square after finishing Rise of the Zilart, but has come back as a freelance writer to complete these three new expansions.

Therefore, it shouldn't be a surprise to see that A Crystalline Prophecy takes a steep turn back to one of the first stories FFXI players are introduced to -- the story of young Aldo, a character introduced during the very first cutscene that acts as the opening to the game. A cutscene that was presented to players six years ago and is now finally being expounded upon.

My hands on with the game included seeing the opening cutscene, in which a great crystal appears over Jeuno and the narrator of FFXI actually talks to all of the people inside of the city. (Yeah, that was a bit fourth wall shattering, but it's not so bad to get past, and a little funny in some respects.) After the crystal disappears, time stops and the player is visited by Young Aldo, who seems to be a herald for things to come. (Please note, Aldo in the current time period of the game is an adult, not a child, so this lends even more mystery to the appearance of this spirit.) It's a very mysterious opening for the short expansion, which players report finishing in as little as two to three days of standard play. Level 30 characters can begin the opening of the expansion, but only level 75 characters will be able to finish it and reap the rewards.

A Crystalline Prophecy rewards the player with a choice of three chestpieces, all of which can be further customized with two enchantments from a very nice list of enhancements. Of all of the areas of the expansion that the game improves upon, this is probably my favorite improvement. No longer are you simply stuck with a choice of armor that you may or may not use. You can finally pick a piece and then further craft it so it can relate to your favorite job and give you buffs that you will use.

The Fields of Valor Update

With the April version update came additional areas equipped with Fields of Valor field manuals, which now can be found in all of the Rise of the Zilart areas. Chains of Promathia, Treasures of Aht Urhgan, and Wings of the Goddess areas are still lacking these quest offering books, and it's unclear if the development team will continue to expand the system. The general consensus amongst the members I spoke with was if the system continued to be a success, it would continue to expand. Originally the system was only suppose to be in the base game areas, but the great success of the system gave the team ambitions to expand upon it.

The system has also been expanded to introduce notorious monster battles (NM battles) that come with a twist. To summon the monster, one must offer tabs (which can be gained from doing other Fields of Valor quests) and either money, an item, or beastmen seals. Win the battle and you'll be rewarded with double the money you traded if you offer money, experience for each beastmen seal offered, or a more powerful version of the item you traded to start the battle. In any case the rewards are substantial, but all rely on winning the battle. Lose, and whatever you offered is now gone for good.

Next Page: Campaign and the final verdict >>
In this article: a-crystalline-prophecy, april-version-update, battles, crystalline-prophecy, expansion, featured, ffxi, fields-of-valor, final-fantasy-xi, item-enhancement, joystiqfeatures, masato-kato, mini-expansion, missions, notorious-monsters, playonline, quests, rewards, rise-of-the-zilart, square-enix, storyline, version-update, virtual-expansion
All products recommended by Engadget are selected by our editorial team, independent of our parent company. Some of our stories include affiliate links. If you buy something through one of these links, we may earn an affiliate commission.
Share
Tweet
Share