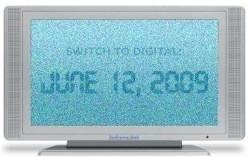 With less than 5-percent of US homes failing to make it under the analog shutoff limbo stick (and still a month to go), there's no reason that come June 12th a whole lot of stations won't be conducting their own shutoff festivities. Just to make sure that there won't be a pack of digital lemmings headed for a step function-like cliff, the US Senate has introduced the DTV Cliff Effect Assistance Act, which allocates $125 million through 2012 to help pay for digital repeaters and translators to fill in those areas that will go uncovered after the switch occurs. This is government money, so you know there's a few strings attached -- in this case, the new bits of infrastructure will also have to serve up wireless communications and broadband traffic where possible. Let's see -- more people with DTV and broadband wireless coverage? Add a tick in the "yes" column for us, please!

In this article: analog shutoff, AnalogShutoff, cutoff, digital cliff, digital tv, DigitalCliff, DigitalTv, dtv, dtv cliff effect assistance act, dtv switchover, dtv transition, DtvCliffEffectAssistanceAct, DtvSwitchover, DtvTransition, hd, legislation, ota, senate, shutoff, switchover, transition
All products recommended by Engadget are selected by our editorial team, independent of our parent company. Some of our stories include affiliate links. If you buy something through one of these links, we may earn an affiliate commission.
Share
Tweet
Share