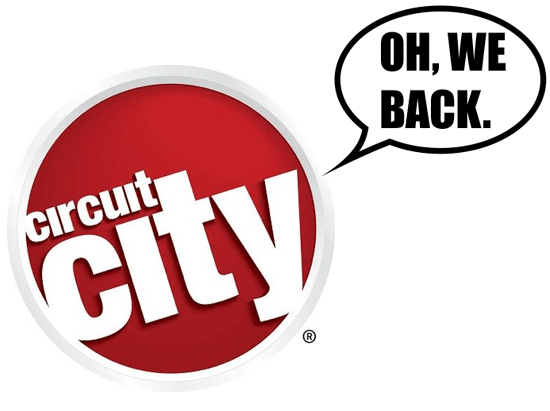 After shelling out some $6.5 million, you had to know that Systemax planned on doing something with Circuit City's trademarks and internet domain names. As of today, CircuitCity.com is back and better than ever, carrying on the legacy of a name that became synonymous with overpriced consumer electronics for nearly six decades. Of course, this doesn't mean that any Circuit City retail stores will be re-opening, but at least the brand is living on in the world wide web. The wonders of the internet: I Can Has Cheezburger?, Twitter and the continuation of an icon that would otherwise be six feet underground.

[Thanks to everyone who sent this in]
In this article: bankrupt, bankruptcy, brand, circuit city, CircuitCity, economy, launch, marketing, online, relaunch, retail, sales, Systemax, tiger direct, TigerDirect, website
All products recommended by Engadget are selected by our editorial team, independent of our parent company. Some of our stories include affiliate links. If you buy something through one of these links, we may earn an affiliate commission.
Share
Tweet
Share