As a service to our busy readers, here's an extremely brief description of Ubisoft's C.O.P.: The Recruit: It's Grand Theft Auto, on the DS. Even more than the actual Grand Theft Auto game on the DS, Recruit recreates the 3D GTAs to a surprising degree of accuracy. It looks like one of the PS2 Grand Theft Auto games -- scaled down, of course, but not as much as we would think. Like in GTA games, you can steal any car, go anywhere in the city, and take part in both narrative and side missions of various kinds.

In fact, you can do pretty much anything you can do in GTA (aside from the pointlessly extreme stuff), despite the fact that you're not actually a criminal, but a police officer ... who used to be a criminal.


Functionally, it's no different. You can steal any car, but in this game you're commandeering it. Not that the poor drivers who get thrown out of their cars without so much as a word know the difference. You can still drive up on the street like an idiot, but pedestrians, using the protective power of the T rating, will dive out of your way before your car can flatten them. Basically, you can be a jerk in this game in the name of protecting the city, whereas in Grand Theft Auto you're a jerk because you're supposed to be a jerk.

In our brief demo, we picked up a car, and then drove up to a casino for our mission, which basically amounted to "shoot some guys." In this mode, the camera goes over-the-shoulder like Resident Evil 4, and you can move your character with the D-pad, while aiming and shooting with the touch screen. There's a "cover system," but it's not so much a "system" as it is "there's stuff you can hide behind."

The next part of the mission entailed tracking down a certain suspect, which was done by scanning the casino's security system. In a cute minigame, we used the stylus to switch between cameras, and pan them around each room. In a later version of the game (that isn't played on the E3 show floor, also known as the place where a jet engine could start up and you wouldn't hear it over all the talking and repeated New Super Mario Bros. music), you'll be able to yell into the mic when you spot the character, but in our demo, we just tapped the screen. We then rushed to his location and, well, shot some more guys. Later, we put out a fire by using the stylus to aim a fire extinguisher.

C.O.P. was technically impressive, capturing the main GTA mechanic (stealing cars and driving them around) well. Even in the brief snippet of gameplay we experienced, we saw variation within the missions as well. We don't know how much stuff there will be to do out in the city beyond driving around, if only because we didn't spend much time outside of missions.

In this article: cop-the-recruit, DS, e3-2009, Nintendo, sandbox, ubisoft
All products recommended by Engadget are selected by our editorial team, independent of our parent company. Some of our stories include affiliate links. If you buy something through one of these links, we may earn an affiliate commission.
Share
Tweet
Share 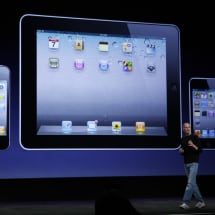