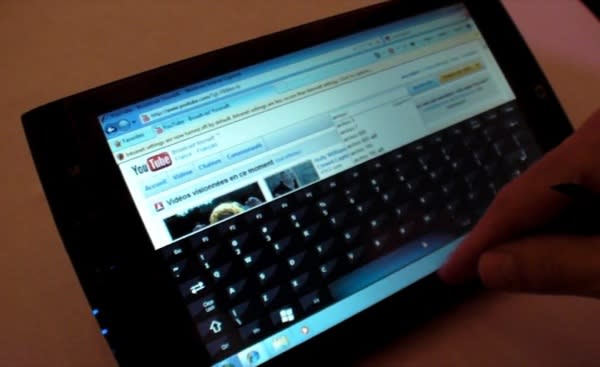 Archos attempt to resurrect the UMPC category of devices got off to a good start yesterday in Paris with the launch of its 16-mm thick Archos 9 pctablet -- a 8.9-inch 1024x600 pixel tablet riding an 800MHz or 1.2GHz Atom Z515 processor, 1GB of memory, up to 120GB disk, webcam, Bluetooth 2.1, 802.11b/g WiFi, and SIM card slot for WWAN connectivity. Archosfans just posted a video of the Archos 9 prototype in action and honestly, that resistive touch-screen looks pretty damn impressive to finger taps. However, since it's running Windows 7, a full-blown desktop OS, you'll still need to pull out the included stylus on occasion to interactive with the Windows 7 UI or applications designed for a mouse and keyboard. Fortunately, the Archos 9 offers an optical mouse on the right-side bezel and left and right mouse keys along the left. Other notable highlights include a removable battery of undetermined capacity, a docking port for added expansion (Ethernet, 2x USB, VGA output), stereo speakers, and an adjustable kickstand for viewing video or working on the Archos 9 with attached USB keyboard and mouse. The Archos rep says it'll be priced between €450 and €500 when it ships around the time Windows 7 launches at the end of October. What we're wondering is how much finger-friendly UI customization will be included by Archos and how they plan to market the device to consumers who already own smartphones, laptops, and even netbooks. Video after the break.

P.S. While Archosfans claims the Archos 9 is multi-touch, nothing that we've found supports that claim on the Archos site or in the video demonstrations. Nevertheless, multi-touch resistive touchscreen technology does exist as demonstrated to us by Stantum back in February. In fact, the ASUS Eee PC T91 also features an 8.9-inch resistive display that does support mult-touch.

In this article: 8.9 inch, 8.9-inch, 8.9Inch, archos, archos 9, Archos9, atom, intel, pctablet, resistive, touchscreen, umpc, z515
All products recommended by Engadget are selected by our editorial team, independent of our parent company. Some of our stories include affiliate links. If you buy something through one of these links, we may earn an affiliate commission.
Share
Tweet
Share