Here's the one-line summary of the Kindle DX: It's a Kindle 2 with a larger screen, hair-trigger orientation sensor, and an awful keyboard. Seriously awful. Yes, we know we should be focused on things like PDF support or even content partners like newspapers and textbook publishers, but we're having a hard time getting over the keyboard -- it's emblematic of some puzzling design choices Amazon made with the Kindle DX. What do we mean? Read on. 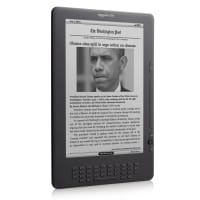 First things first -- yep, the screen's bigger. At 9.7 inches, it's basically the size of the entire Kindle 2, which allows for some adorable family photos, but also means that it's the size of most paperback books -- reading a book on the DX feels entirely more like reading a novel, because you're seeing the same amount of content on each page. It's actually quite noticeable. All that added screen real estate ain't free, of course: the DX is also distinctly heavier than the Kindle 2. We're not saying it's a clunker, just that it's weighty -- your natural instinct is to hold it with two hands.

Which is a good thing, because if you're one-handing it you're likely to lean it to one side or another and kick in the orientation sensor, which is apparently set to high alert. Unlike, say, the iPhone, which requires a full 90-degree turn to trigger a screen rotation, the DX will go off at just about 45 degrees, which is right where we'd want to hold it lying on a couch or in bed. Yes, you can lock the orientation, but it takes a trip to the menus and some more clicking around, and it seems like all that work defeats the purpose. Like so many things about the DX, we just find ourselves wondering how much thought went into this -- we were fed up with it after a day of use.

On top of that, we have no idea why Amazon got rid of the left-side previous / next page buttons from the Kindle 2 -- if anything, the DX should have page controls on all four sides, since the screen can flip 360 degrees. With the page controls located on just one side, turning pages in landscape mode requires an awkward reach to the top or bottom, which makes using it sideways for any period of time somewhat tedious. And then there's the keyboard.

It's hard to say if we've ever used a keyboard this bad, and hell, we've used the Kindle 2's keyboard. Not only does the increased width of the DX make for some awkward thumb reaches, the keys themselves are tiny, placed poorly, and have so little travel and feel so gummy that it's almost impossible to tell if you've actually pressed one if you try and go quickly -- combined with the glacial screen refresh, you're basically forced to peck it out one letter at a time. On top of that, any symbol beyond a period requires a trip to a menu navigated by the five-way rocker. We understand that the Kindle is about reading, not writing, but the DX is targeted at students, and and there's no way you can take notes with this disaster. We'll stick with the hard copy and a laptop for now, thanks.

Another puzzling design choice involves PDF support. For the most part it works well with standard size pages, but there's no zoom, so you're stuck with however the DX decides to display your file -- the only way to get things bigger is to switch to landscape. Since not all PDF pages fit on the screen, that means you often end up with a weird jumble of page breaks and cut-off content -- it's easy to totally lose the structure of a document or slide deck after a while.

Again, the slow refresh rate of the E Ink screen just aggravates this issue -- this would be fine if we could scroll along, but sitting there clicking and waiting for the screen to update just made us long for our laptops.

In the end, we're just not sure Amazon put enough thought into the Kindle DX to justify the launch hype -- fundamentally, it really is just a Kindle 2 with a larger screen and more storage, and while that means the core experience of simply reading a book is somewhat more pleasant, all of the Kindle 2's limitations are still front and center, and in some ways made worse. We'd probably feel a lot differently if the $489 pricetag was lowered through newspaper subscription subsidy or cheaper content fees, but unless you're one of the very few students at a school piloting the DX or you happen to live outside of a New York Times delivery area, you're stuck with the full bill. Hopefully Amazon's move to open up Kindle content to other devices will light a fire under the Kindle hardware team and the next rev will offer some bright new ideas in the e-reader space, but for right now we'd say the same thing about the DX as we did the Kindle 2: it's nice if it meets your needs and you have the cash, but for everyone else it's not such a dramatic improvement over an actual book or newspaper that you have to have it.