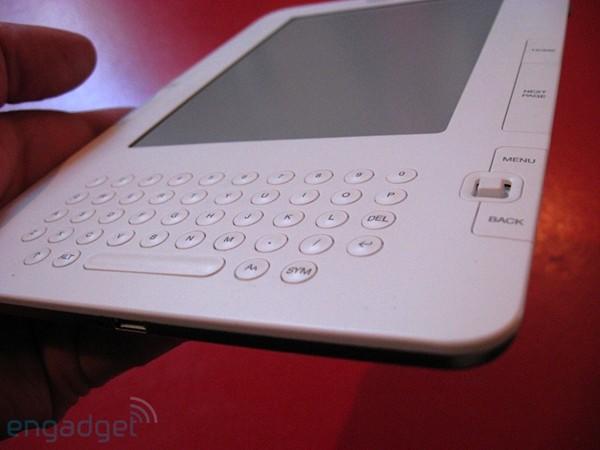 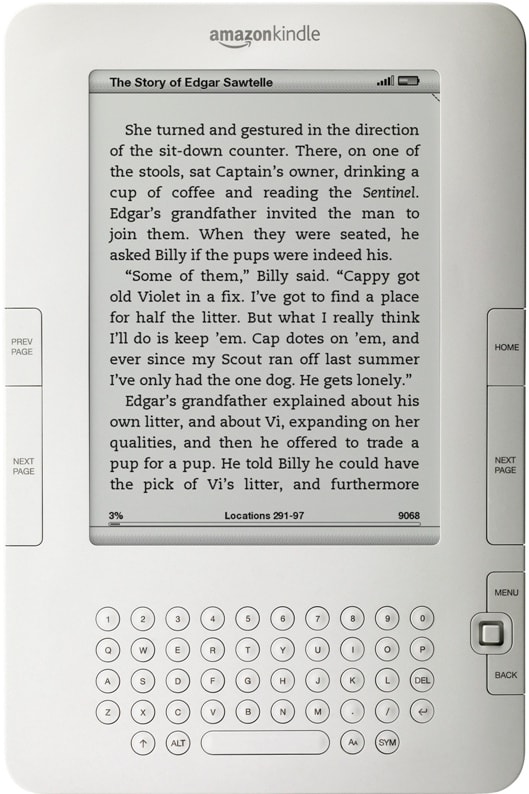 Having already handled the Kindle 2 at its launch in New York City, we had a pretty good idea of what we'd be getting into after it arrived at the bunker. Once we actually had a little time to spend with the device, it really started to sink in how much those minor tweaks can add up to make a big difference. Jumping from Amazon's original attempt at an ebook reader to its latest iteration isn't exactly like day and night, but it's definitely a positive shift in the experience, though one that leaves us wondering how they failed to make some of these choices the first time around. Read on for a full look at the Kindle 2.

How would you rate the Kindle 2?
We want to hear what you think. Post a quick review now to join the conversation!
Write a review

The look of the previous Kindle was, frankly, jarring. It was an angular, odd looking device that appealed on some strange, sci-fi level, but certainly wasn't immediately approachable. And it wasn't just the jutting body design; the original Kindle dismissed any kind of familiar navigation for its bizarre slider / click wheel combo with a silver-backed LCD strip, which was good for moving up and down through menu options, but not much else. Then, of course, was the issue of button placement. There's probably not a single Kindle owner who hasn't been frustrated by the low, easy-to-accidentally-tap placement of the next / previous page buttons, which were not only extra sensitive, but impossible to avoid.

The Kindle 2 does away with almost every awkward convention introduced in the original version. The device is now cleanly laid out, very much shaped like a large iPhone; a big rectangle with rounded edges. The keyboard has gone from that unnatural, slanted arrangement to a standard, familiar keyboard layout, and the keys are now small and round instead of rectangular pellets. The next / previous buttons occupy a very similar location, but are much smaller (as opposed to taking up the entire side of the device), so the threat of constantly hitting them is noticeably alleviated. They've also been stiffened up, so even if you do accidentally brush past one of them, it takes a little more effort to engage.

As we said before, the slider control is gone, replaced with a five-way rocker, which allows for horizontal as well as vertical movement -- a huge help when you're navigating through text (we'll get to that in a minute). We like the new navigation, but it's not as speedy for jumping through lists -- which is how a lot of the Kindle's menus are presented. Instead of smoothly sweeping up and down, you have to notch, notch, notch till you get where you're going.

Along the side on the upper right is a volume rocker, and down along the bottom is a microUSB port. The back is now flat and smooth bushed aluminum, with a set of stereo speakers along the bottom, and a strip of gray rubber up top. Up on the top of the unit is a 3.5mm headphone jack and a slider power / sleep switch.

The screen itself is looks somewhat clearer than the original version, helped largely by the fact that the e-ink display can now show up to 16 shades of gray as opposed to the previous four. You can definitely see those differences in font smoothing and on images (which, incidentally, you can now zoom in on). Additionally, Amazon says the new screen refreshes 20 percent faster, and in our tests, that seems to be true -- though it's more noticeable in cursor movements and text display rather than full page turns. That faster refresh means the Kindle 2 gets one step closer to acting less like a static page, and more like a slow computer; and it's an improvement, without question.

Inside, Amazon has axed the SD slot in favor of putting 2GB of storage onboard. We would have preferred that they had given us the option of both, but 2GB should be more than enough for most people's book / newspaper needs, and since you can offload as you like while retaining the material, it doesn't strike us as a huge issue.

All in all, the hardware has been seriously streamlined, and the result is nothing short of gorgeous. Besides being evened out and pulled in, the Kindle 2 is also astonishingly thin -- just 0.36-inches -- which makes it a pleasure to carry, though we miss some of the bulk of the original for reading duties. It's not a huge deal, but besides the frequent mis-tapping of buttons, we still feel the original more closely replicates the "book holding" experience. But ultimately, the question that will be nagging most people here is, "why didn't they do this stuff the first time around?" and it's a valid one. It's amazing to consider how many (original) bad hardware choices have been overcome with this new design, but also somewhat vexing if you were an early adopter.

Not a ton has changed in the software of the new Kindle, but what has changed makes a world of difference in ease of use. Some of the alterations are clearly just mutations spurred on by moving from up / down navigation to a full four-way experience, but others seem like no-brainers that we wish had been included on the first pass.

The first big change we noticed was in the search function. In the original Kindle, you had a dedicated search button which would bring up a text entry field, then transport you to a page to select how you wanted to search, then to your results. Now, you've got search tool in your menu that you can jump into from the home screen which gives you a load of options for how and where you want to look -- a slightly more familiar format. This seriously streamlines the process of finding what you want, and proved to be a big help on more than one occasion. Additionally, searching your own content is handled much better, allowing you to begin typing in your query while you're on your home page -- the same goes for finding text while you're in a document.

Using the dictionary while in a document to look up words used to be a huge hassle; you had to select an entire line of text and see a definition for every word... on a separate screen. Whether that was a bad UI decision or a limitation of the navigation is anyone's guess -- but it's fixed here. Now you can use the cursor much like you'd expect, to jump through a document word by word, and your definition pops up along the bottom in real-time, like a little alert.

In general, menus seem cleaned up and organized a bit better, with less items to move through and more succinct descriptions of functions. Additionally, the look and feel of the UI has been given an update, forgoing some of the more extraneous graphic bits and more clearly defining sections, like the info bar up top and the page information along the bottom.

We did, however, have some troubles trying to use Whispersync, a new feature that Amazon is touting which allows you to keep your books and articles continuous across devices (as well as the spot you stopped reading in). While trying to sync an issue of the New York Times, we could get the management section of Amazon to tell us it was sent to our original Kindle, but it never showed up in our list of content. For books it seemed to work as described, though we're at pains to understand why you'd be going back and forth between an old Kindle and a new one. Now, going back and forth from a Kindle to, say... an iPhone -- that we get.

Of course, there's been a lot of controversy about one of the new functions of the Kindle 2, namely its "read to me" mode, or text-to-speech. This item has been the subject of a heated debate, sparked mostly by an accusation from the Author's Guild that the technology infringes on author's copyrights by turning your regular text into what amounts to an audio book. Something tells us if the Guild took a moment to listen to this voice, they might reconsider the accusation... because it's an insult to voice actors. For our money, the text-to-speech option is a nice novelty, but not remotely useful for prolonged readings, or readings of anything but the most simplistic material. This is the "computer voice" we've come to know and love -- nothing more, nothing less, and it's not exactly pleasant. While it is available in male or female varieties, and can be slowed down or sped up, it's hardly a stand in for an actual human (recorded or otherwise). When you step back and take a look at the device, it's clear that the most notable changes have come in the form of hardware tweaks. Besides the text-to-speech function, there's not much you can do on the new Kindle that you couldn't do on the old one. Books still cost just as much to download, and you still have largely the same set of options when you get them on the device. The buy-in for the unit itself is $359 -- not cheap -- and everything you put on it is going to cost you a little bit more. After a while, that can start to add up, and we're not convinced it makes sense for just anyone. Ultimately, it boils down to a question of needs, because -- like the first Kindle -- the Kindle 2 doesn't represent such a sea change in technology that we think everyone should run out and buy it.

A lot of people are fond of calling the device an "iPod for books" as if that's just what most people want or require, and we're not so sure of that. Still, the Kindle 2 delivers an enjoyable experience with noticeable leaps in usability, and big leaps in industrial design. If you travel lightly, are a voracious reader, and absolutely love gadgets, you'll probably get this device. Is that everyone? No... but it's a lot of people we know.

In this article: amazon, amazon.com, engadget review, EngadgetReview, features, kindle, kindle 2, kindle 2.0, Kindle2, Kindle2.0, review
All products recommended by Engadget are selected by our editorial team, independent of our parent company. Some of our stories include affiliate links. If you buy something through one of these links, we may earn an affiliate commission.
Share
Tweet
Share