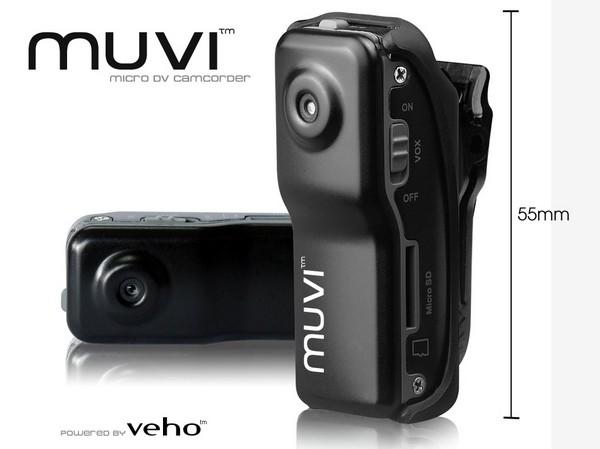 It's outrageous claim time again, with Veho is saying its new Muvi micro DV camcorder is "officially the smallest high resolution DV camcorder in the world." We'd have to say it looks a little bit bigger than that Wrigley's-sized model we spotted a few years back, and 640 x 480 is hardly high resolution, but let's move on. The Muvi is designed as something of an actiony cam in the vein of a Twenty20 or a ContourHD, able to clip to your jersey or stick to your helmet and record video plus two megapixel stills onto a microSD card. Voice activation means you should be able to activate it without pressing any buttons, and hopefully you can teach it to start filming whenever someone says "Hold my beer and watch this." The cam appears to be shipping to European adventure-types for a good bit less than its £79.99 ($132) MSRP, but there's no word on when thrill-seekers elsewhere can clip one on.

Update: Well, it definitely isn't the smallest; as many of you pointed out this is just a re-brand of the AEE Mini DV cam that's exactly the same size... and shape... and is already widely available for under $100.

In this article: 2 megapixel, 2Megapixel, camcorder, helmet cam, HelmetCam, micro dv camcorder, MicroDvCamcorder, microsd, muvi, veho, veho muvi, VehoMuvi, vga
All products recommended by Engadget are selected by our editorial team, independent of our parent company. Some of our stories include affiliate links. If you buy something through one of these links, we may earn an affiliate commission.
Share
Tweet
Share