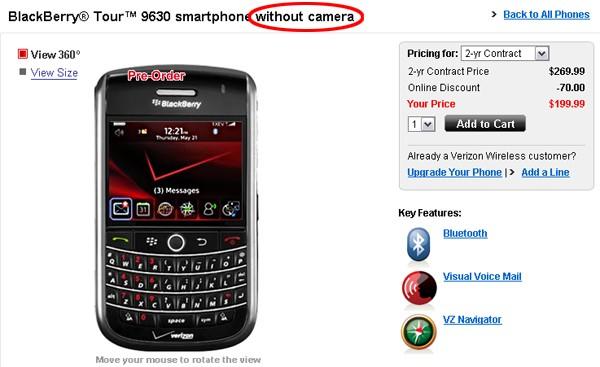 Only the most buttoned-up, high-security businessfolk still require phones without cameras these days -- and seeing how the BlackBerry Tour is destined to become the new de facto choice for buttoned-up, high-security businessfolk, it stands to reason that a cameraless version makes a whole lot of sense. Sure enough, it turns out that Verizon will be offering a non-cam version right alongside the regular Tour when it launches on the 12th, but don't think of this as a great money-saving opportunity if you don't snap a lot of photos -- Big Red wants to charge the same $199.99 on contract for this one that they're charging for the regular version. CIA operatives, though, have to be pretty stoked.

In this article: 9630, blackberry, blackberry os, blackberry tour, blackberryos, BlackberryTour, camera, cdma, edge, ev do, evdo, gsm, hsdpa, mobile, research in motion, researchinmotion, rim, tour, umts, verizon, verizon wireless, VerizonWireless, vzw
All products recommended by Engadget are selected by our editorial team, independent of our parent company. Some of our stories include affiliate links. If you buy something through one of these links, we may earn an affiliate commission.
Share
Tweet
Share