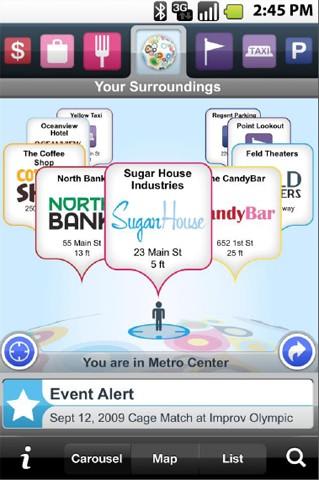 Though the myTouch 3G is really just an HTC Magic at its core, T-Mobile seems to be doing everything it can to gussy it up with as much crapware bloatware value-add software that it can. All kidding aside, this really isn't crapware -- the carrier is apparently quite serious about calling out best-in-class apps in the Android Market, going so far as to create a separate "app pack" application that'll drill down stuff it wants to highlight. T-Mobile tells us this might even include T-Mobile's own visual voicemail application, which is currently in development, but whether that's available at launch or not, nothing in the app pack won't be findable in the regular Android Market, so there's no reason to worry.

The crown jewel in the myTouch 3G's arsenal will be Sherpa, an entertainment discovery app that learns your preferences in food, stores, and attractions over time based on your ratings and bubbles them to the top so they're easier for you to find. Naturally, it's location-based so that you can find things around you; it'll be interesting to see how well this works in practice, but at a glance, we're excited to give it a shot so that we can finally stop eating In-N-Out seven nights a week (not to say there's anything wrong with that).
In this article: android, app pack, AppPack, htc magic, HtcMagic, magic, mytouch, mytouch 3g, Mytouch3g, sherpa, t-mobile
All products recommended by Engadget are selected by our editorial team, independent of our parent company. Some of our stories include affiliate links. If you buy something through one of these links, we may earn an affiliate commission.
Share
Tweet
Share