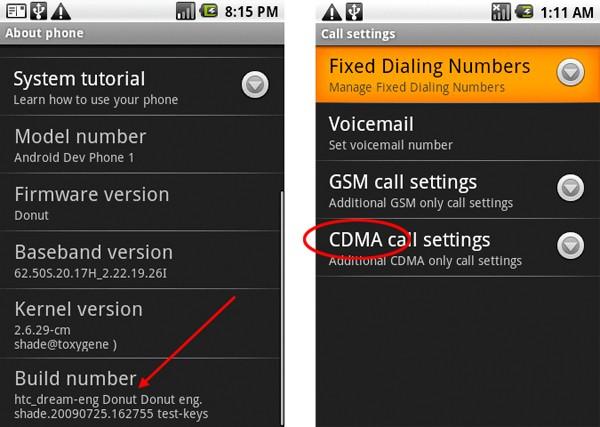 Android's official code repository has been updated with a fresh load of Donut stuff in the past day or so, and as you might imagine, the dev community is already having a field day with it. Early reports show that all of the features demoed at I/O this year have made it into this cut in one form or another, including universal search, text-to-speech, and system-wide multitouch with gesture support, allowing users to draw symbols on the screen to trigger actions. What's more, though, the codebase is showing signs of CDMA support -- a must for Sprint and Verizon, of course, both of whom will almost certainly have Android sets at one point or another -- and a cool 5-in-1 bank of toggle switches in a home screen widget that can be used to control common features like Bluetooth and WiFi.

Perhaps more excitingly, the community is hard at work on a couple major fronts here: first off, the Donut build is actively being ported to current handsets, and an Android Dev Phone 1 / T-Mobile G1 version is already available (though very, very crashy and incomplete right now). Secondly, work is being conducted to extract major elements of Donut (some of the new widgets, for example) and roll them into cooked 1.5 builds, making the best stuff available in a more solid, accessible form without having to wait for 2.0 to become stable. If you're an adventurous -- nay, borderline mental -- G1 owner, though, you can start your journey to Donut right now.

Read - Donut availability
Read - G1 port
In this article: android, android 2.0, Android2.0, breaking news, BreakingNews, dev phone 1, DevPhone1, donut, g1, htc, mobile, t mobile, t-mobile, t-mobile g1, T-mobileG1, tmobile
All products recommended by Engadget are selected by our editorial team, independent of our parent company. Some of our stories include affiliate links. If you buy something through one of these links, we may earn an affiliate commission.
Share
Tweet
Share