Oculus Quest will have Bigscreen's VR theater on launch

Oculus redesigns the Rift interface for Touch and customization 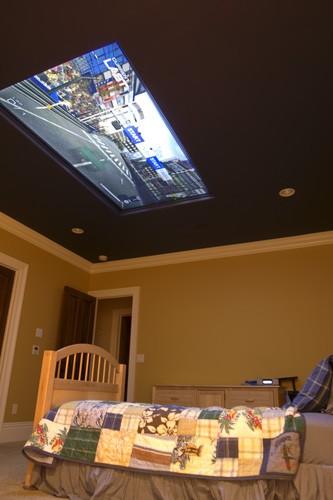 Thought you had it all set with a 14-inch TV and an NES in your room as a kid? Then you might want to look away for a minute, lest your childhood memories be diminished. Everyone else can take a good look at this 98-inch screen that Patti Deni had installed flush in the ceiling of her son's bedroom. At the center of the setup is an NEC projector paired with some Draper projection mirrors, which fills that 98-inch StarGlas60 display with some full HD images than can be viewed from just about any angle. As you might expect, however, this wasn't exactly the easiest of installs, and apparently even involved reframing and reinforcing the ceiling. No word on any mom of the year awards just yet, but the setup itself has at least attracted the attention of Electronic House's Home of the Year awards.
In this article: big screen, BigScreen, ceiling, ceiling-mounted screen, Ceiling-mountedScreen, excess, excessive, hdtv, projector, starglass60
All products recommended by Engadget are selected by our editorial team, independent of our parent company. Some of our stories include affiliate links. If you buy something through one of these links, we may earn an affiliate commission.
Share
Tweet
Share