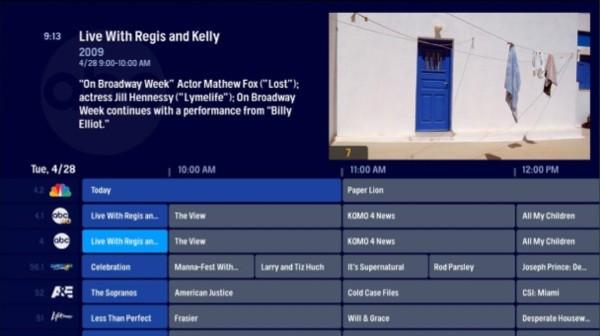 All the Moxi owners out there should be happy to learn that Digeo intends to keep its promise by continually releasing updates to Moxi HD DVR on a regular basis. The latest Summer update should hit your Moxi in the next few days and brings some of the more anticipated features -- no still no TiVoToGo like functionality -- like the grid guide pictured above, support for the Moxi Mate and Switched Digital Video (SDV).

First up is SDV support, but while adding the ability to tune channels delivered via SDV is appreciated, it really falls under the "about time" category. Next is the new Moxi Mate, which holds more promise but just because it starts shipping tomorrow for $399, doesn't mean it will deliver. As it stands now, the Mate requires that you bring your own network connection to your second TV -- so no MoCA support like FiOS and other cable operator DVRs work -- and it doesn't completely replace the STB in your bedroom because it doesn't do Live TV and you can't schedule recordings with it. You can at least pick up where you left off watching a record without transfering it first, but the included remote can't control your TV's channel or input, so you're going to need a universal remote or you're going to make life in the bedroom as complicated as some living rooms. Our last gripe about the Mate (yes there's more) is the fact that Digeo only recommends running one Mate at a time with a hard limit of three concurrent streams. The good news though is that existing Moxi HD DVR customers can pick up a Mate for $199, and there're even package deals and payment plans to lesson the blow. The breath of fresh air coming with this update is the fact that up to 6TB of external storage is now supported and DLNA support is improved with added codec and containers like H.264 in MKV files -- although obviously MKV can support all kinds of codecs that may or may not also be supported.
In this article: DLNA, H.264, hd, HD DVR, HdDvr, MKV, Moxi, Moxi HD DVR, Moxi Mate, MoxiHdDvr, MoxiMate, SDV, Tuning Adapter, TuningAdapter
All products recommended by Engadget are selected by our editorial team, independent of our parent company. Some of our stories include affiliate links. If you buy something through one of these links, we may earn an affiliate commission.
Share
Tweet
Share