'Rime' creators will remove anti-tampering code if it's cracked

NEC wants you to spot counterfeits using your phone's camera 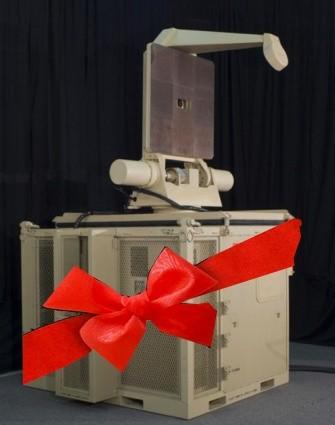 As you are no doubt aware, one of the perks of being in the corporate security field is that you get to try out things that would come across as, well, unseemly if put in the hands of the government. While there's been some controversy over the possible use of Raytheon's 10,000 pound "portable" Silent Guardian by the military, it appears that at least one private customer has no such qualms. We're not sure exactly who placed the order -- news of an "Impending Direct Commercial Sale" was just one bullet point of many at Raytheon's recent presentation at a NATO workshop on anti-pirate technologies. The company itself is being mum on the subject, saying that it would be "premature" to name names at the present time, but rest assured -- this is only the beginning. As soon as these things are small enough to fit in your briefcase or glove compartment, every nut in your neighborhood will want one. In the mean time, looks like you're stuck with the Taser. [Warning: PDF read link]

[Via Wired]
In this article: anti-piracy, defense, less than lethal, LessThanLethal, microwave, military, nato, nonlethal, nonlethal weapons, NonlethalWeapons, pain ray, PainRay, pentagon, piracy, pirates, protection, ray gun, RayGun, Raytheon, safety, Silent Guardian, SilentGuardian
All products recommended by Engadget are selected by our editorial team, independent of our parent company. Some of our stories include affiliate links. If you buy something through one of these links, we may earn an affiliate commission.
Share
Tweet
Share