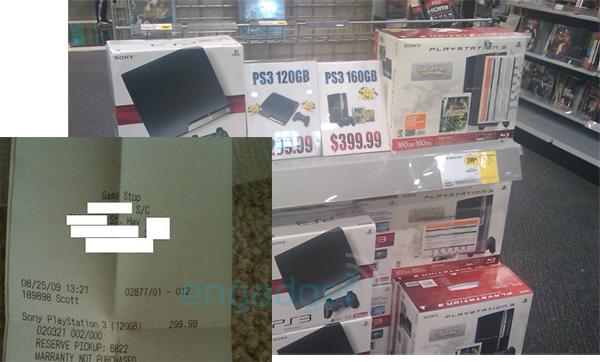 Since we first heard about Florida going Slim with its PS3s, we've gotten numerous reports abut the console showing up on retail shelves in Best Buys and GameStops across these 48 contiguous states. We've also heard whispers that brick-and-mortar Sony Style locations are getting shipments and will be unleashing to the masses soon after -- not to mention Amazon's still promising at least some deliveries for tomorrow. Our calls to Sony haven't been returned yet, but it seems like the release date now is more or less "as soon as your local electronics store gets a shipment." Another shot of the boxes in the wild after the break, and let us know below if and where you've managed to spot one!

Update: We just got confirmation from Sony that retail stores are being told they can sell the Slim as soon as they receive it. Now let's see how the the 160GB PS3 classic fares with its slender counterpart sharing price point and shelf space.

[Thanks to everyone who sent these in!]

In this article: playstation, playstation 3, playstation 3 slim, Playstation3, Playstation3Slim, ps3, ps3 slim, Ps3Slim
All products recommended by Engadget are selected by our editorial team, independent of our parent company. Some of our stories include affiliate links. If you buy something through one of these links, we may earn an affiliate commission.
Share
Tweet
Share