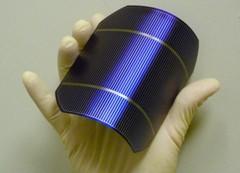 We've seen a few different approaches to printable, and occasionally paintable solar cells over the years, but it looks like JA Solar was particularly taken with Innovalight's so-called silicon ink-based solar cells, and it's now announced that its teaming up with the company to commercialize the technology. In addition to being "printable" and cheaper to manufacture than traditional solar cells, the company also claims that the silicon ink solar cells also boast an impressive 18 percent conversion efficiency, which has apparently just been backed up by both the U.S. Department of Energy's National Renewable Energy Laboratory and The Fraunhofer Institute for Solar Energy Systems. Details on the deal are otherwise a bit light, but JA Solar says that it'll manufacture the new cells using its existing solar cell manufacturing lines, which should lower the cost even further and, if all goes as planned, allow for "initial commercialization" sometime in 2010.

In this article: innovalight, ja solar, JaSolar, printable solar cell, printable solar cells, PrintableSolarCell, PrintableSolarCells, silicon ink, SiliconInk, solar, solar cells, solar power, SolarCells, SolarPower
All products recommended by Engadget are selected by our editorial team, independent of our parent company. Some of our stories include affiliate links. If you buy something through one of these links, we may earn an affiliate commission.
Share
Tweet
Share