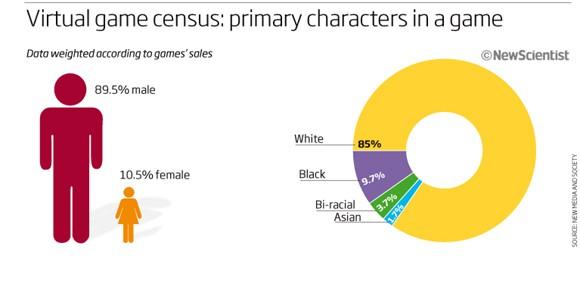 Even though you've seen CJ gangbanging in GTA: San Andreas and Faith gallivanting across a vast urban landscape in Mirror's Edge, it doesn't mean minorities and women are finally getting a fair shake in gaming. According to a census of video game characters conducted by SoCal researcher Dmitri Williams (via NewScientist), it's still an area largely dominated by white men. Gasp!

Of course, with an undertaking as huge as checking every character in every game ever, this data of Williams and company comes with a few caveats. First of all, the census went down in February of 2006 and has only surfaced recently thanks to NewScientist. Second, the only systems and games combed include the top 150 titles sold on Xbox, Xbox 360, PlayStation, PS2, PSP, GameCube, GBA, DS and PC. Still, it's a lot to sift through and -- when the dust settled -- Williams and the gang came up with a couple of charts and some data to back up their claim.

[Via Game Politics]
In this article: census, dmitri-williams, minorities, minority
All products recommended by Engadget are selected by our editorial team, independent of our parent company. Some of our stories include affiliate links. If you buy something through one of these links, we may earn an affiliate commission.
Share
Tweet
Share