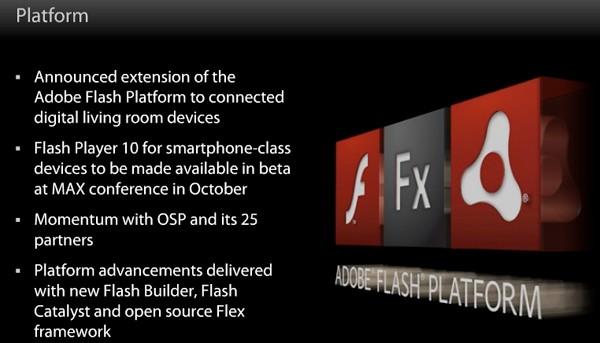 Flash 10 already supports HD video on the desktop, but 10.1 -- announced this week at Adobe's MAX conference in Los Angeles -- is being billed the first to really reap the full benefits of the Open Screen Project by unifying feature sets across a wide variety of platforms on the desktop, the laptop, and the pocket. As usual, Windows, Mac, and Linux will all get hooked up with the latest release, but public betas of 10.1 for Windows Mobile and webOS will be hitting before the end of the year as well followed by Android and Symbian in "early" 2010. RIM's also gotten official with its rumored membership in the Open Screen Project, though the lack of a timeline for 10.1 support in BlackBerry OS is a stark reminder of the long technical road that lies ahead for Waterloo as it tries to match the smartphone competition tit-for-tat in the multimedia space. At the end of the day, mobile Flash means nothing without the horsepower to properly drive it, so let's hope that Tegra, Snapdragon, and next-generation architectures like OMAP4 start to come on board en masse just as these builds come out of beta.

Speaking of fast chipsets, the other big news out of the show is that Flash 10.1 will take advantage of GPU acceleration on a number of key mobile platforms, including both nVidia's Tegra and Qualcomm's Snapdragon alongside ION for smooth (well, theoretically smooth) 720p and 1080p video on the latest generation of netbooks and smartbooks.

Update: Added video of the Palm Pre running three instances of Flash in parallel after the break.

In this article: 10.1, adobe, android, blackberry os, blackberryos, flash, flash 10.1, Flash10.1, ion, mobile, multimedia, nvidia, qualcomm, rim, snapdragon, symbian, tegra, web os , webos, windows mobile, WindowsMobile
All products recommended by Engadget are selected by our editorial team, independent of our parent company. Some of our stories include affiliate links. If you buy something through one of these links, we may earn an affiliate commission.
Share
Tweet
Share