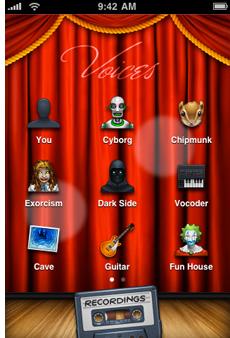 Novelty and social applications are a big hit on the iPhone. A new one from the folks of Taptivate is sure to be a big hit when it is released in the near future. Voices for iPhone is touted as an "audio recorder with a twist" and even a "social voicemail" utility.

With Voices [iTunes Link], you're given tools to manipulate your own voice in many fun and odd ways. Whether you'd like to transform into Darth Vader or a chipmunk, you're good to go with Voices. Sporting a unique and very pretty user interface, the application boasts a lot of cool extras sure to show you how hard the developers have worked on it.

The app has a home screen-like selection window where you can choose the way in which you want your voice manipulated. A stack of your recordings can also be accessed with just a tap.

After initially seeing this app when it was in early beta, it has come a long way since then. The app is being published by Tap Tap Tap and is available for only 99 cents. Also, to celebrate the release, MacHeist is offering a special "Tweetblast" deal, giving away a free copy of Voice Candy for Mac to people who help spread the word on Twitter.

Here's some shots of Voices in action:

In this article: app review, AppReview, false, iphone, Novelty, recording, social, Taptivate, voice, voice modulator, voicemail, VoiceModulator, Voices
All products recommended by Engadget are selected by our editorial team, independent of our parent company. Some of our stories include affiliate links. If you buy something through one of these links, we may earn an affiliate commission.
Share
Tweet
Share