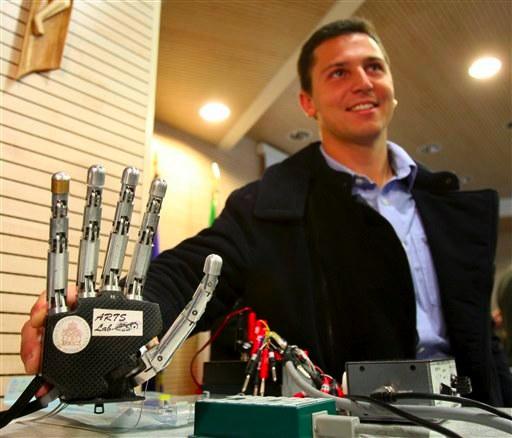 We've seen plenty of developments in neurology and robotics over the years, including the Smart Hand prosthesis and targeted muscle reinnervation, and now researchers at the Bio-Medical Campus University of Rome have announced LifeHand. Connected via electrodes to an amputee named Pierpaolo Petruzziello, the device is able to perform complex movements and is controlled by thought alone. "It's a matter of mind, of concentration," said Petruzziello. "When you think of it as your hand and forearm, it all becomes easier." The five year project, funded to the tune of about $3 million by the European Union, is just the beginning -- they still have to figure out how to make the implants permanent. Get a closer look below.

13
In this article: european union, EuropeanUnion, hand, health, medicine, Pierpaolo Petruzziello, PierpaoloPetruzziello, prosthetic, research, robot, rome, science
All products recommended by Engadget are selected by our editorial team, independent of our parent company. Some of our stories include affiliate links. If you buy something through one of these links, we may earn an affiliate commission.
Share
Tweet
Share