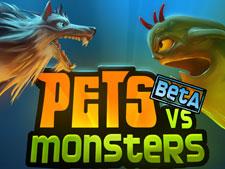 When most parents think of children's MMOs, nobody would likely think of a studio like Funcom. After all, Funcom is the company that brought us Age of Conan, an MMO rife with boobs, blood, and beheading. Quite possibly the absolute last place you'd let your kiddies romp around, really. That's undoubtedly why they decided to spin off a new studio called SweetRobot as they start up their newest MMO offering aimed at the 8-12 year old crowd: Pets vs. Monsters! Slated to be a free to play game, Pets vs. Monsters has apparently been under development for two years and will enter public beta this month. Now how's that for a holiday surprise!

According to Funcom CEO Trond Arne Aas, "SweetRobot will be focusing on publishing games outside the traditional high-end MMO-segment which Funcom has been focusing on the last years. This will allow us to explore new market opportunities that differ from what we have been doing before while still retaining Funcom's familiar profile. This definitely marks a new and exciting direction for us." It is, however, a highly competitive market, so time will tell if this newest outing will take off for them. If you're curious to see a bit more of Pets vs. Monsters, then be sure to check out the gallery of screenshots and concept art below, or better yet, have a look at the game-play video for an early peek!

8
In this article: childrens, concept-art, family-friendly, funcom, kids, mmo, new-studio, pets-vs-monsters, screenshots, subsidiary, sweetrobot, video
All products recommended by Engadget are selected by our editorial team, independent of our parent company. Some of our stories include affiliate links. If you buy something through one of these links, we may earn an affiliate commission.
Share
Tweet
Share