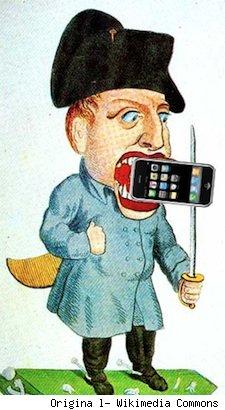 In a report that is sure to bring cheer to legions of Verizon Droid owners, Strand Consult is saying that all of us who have purchased iPhones are delusional liars.

CNET's Chris Matyszczyk reported in his Technically Incorrect column that the Danish marketing consultants posted an article titled "How will psychologists describe the iPhone syndrome in the future?" Among other things, the article describes the similarity between iPhone users defending their (according to Strand) deficient smartphones and the psychological condition known as the Stockholm Syndrome. The latter has been used to describe how hostages often begin believing and defending their captors. Unswitchable Microsoft fans have also been accused of Stockholm Syndrome.

Yep, we're all delusional, and Strand Consult offers "proof" of how we've all been taken in by Apple by listing 20 deficiencies of the iPhone platform (most of which, by the way, are no longer valid). The company even goes so far as to say:

In reality the iPhone is surrounded by a multitude of people, media and companies that are happy to bend the truth to defend the product they have purchased from Apple.

Not only are we all delusional wackos, but we're also liars! Strand wittily created a name for our disease -- The iPhone Syndrome -- and is glad to share this with everyone in a free report. Of course, you have to register to get the report, which most likely puts you on a marketing email list. The following quote may provide some insight into the potential customers they're hoping to reach with this report.

if you are one of the many other phone manufacturers: Nokia, Sony Ericsson, Samsung, LG, HTC etc., you will most probably be very envious of the euphoria that Apple has invoked in their customers.

I'm glad to be part of the Crazy Ones that Apple celebrated in the Think Different ad campaign. How about you? Do you think that we're all unable to see that the Emperor has no clothes, or is this report an insult? Do we completely disregard the mobile industry's rush to imitate various elements of the iPhone, including the App Store? State your opinion in the comments.

[via CNET]
In this article: consulting, insane, iphone, liars, marketing, opinion, poll, stockholm syndrome, StockholmSyndrome, strand
All products recommended by Engadget are selected by our editorial team, independent of our parent company. Some of our stories include affiliate links. If you buy something through one of these links, we may earn an affiliate commission.
Share
Tweet
Share