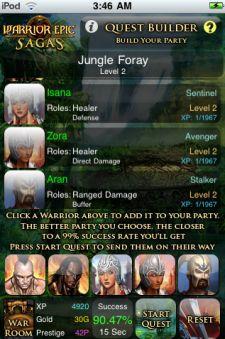 This is an interesting trend: Warrior Epic, an MMO game by True Games, has announced that they've released an iPhone app [iTunes link] version for free, featuring "a small portion of the strategy, role-playing and battles found in the online MMORPG," kind of like a taster for the actual PC game. The game itself isn't a 3D action game like the full game, but rather a "stat game," much like many of the minigames being released on Facebook and other social platforms (in fact, Warrior Epic is releasing this game as a Facebook game as well).

Unfortunately, the only real tie between the games seems to be having the same name and being set in the same universes -- we don't have any characters to test, but it doesn't seem that you can transfer your actual characters or items from the PC game across to the iPhone. But this will be a trend to watch -- two other major MMOs have started work on official iPhone apps, and of course the 800 lb. gorilla of the MMO world, Blizzard, maker of World of Warcraft, has shown a strong interest in the iPhone as a platform, even though they haven't quite released any games on it yet. In the future, you can probably expect to see platforms like the iPhone host access (if limited) to your favorite persistent online games even while you're away from your computer. Should be exciting.

In this article: app-store, apps, blizzard, crimecraft, facebook, fallen-earth, games, gorilla, graphics, iphone, mmos, platforms, releases, stat-game, warrior-epic, world-of-warcraft
All products recommended by Engadget are selected by our editorial team, independent of our parent company. Some of our stories include affiliate links. If you buy something through one of these links, we may earn an affiliate commission.
Share
Tweet
Share