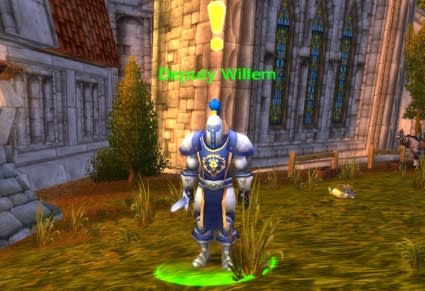 Well Happy New Year Massively readers! Hope everything is working out for you all on this second day of the year 2009! Did you get caught up on your favorite MMO yesterday during the holiday?

With the new year finally here, we have all sorts of new games in production and slated for a 2009 release. But that doesn't mean we should entirely forget about 2008. All sorts of things have happened in 2008 that the industry and players can learn from, but what should make the classic "end of year" top 5 list?

Well, as I am absolutely no more inventive than every other blog in existence, this edition of Anti-Aliased is dedicated to the top 5 things the industry and culture should learn and take into 2009, rather than forgetting. Some of it's funny, some of it's serious, but let's be honest -- it all goes towards perfecting how to have fun in virtual worlds.

No, really, stop doing it. This sounds like a pet peeve, and I know why developers do it (instant recognition of quest locations with no prior instruction), but look at this way: it makes you look lazy. If you get your team together and make a brand new game, you can do yourself a favor and just drop the yellow exclamation marks. Find a new symbol, preferably something connected to your game and just as well recognizable, and use that instead. Oh, and don't listen to Phil from the marketing department -- using yellow exclamation marks won't bring you any luck from a certain online fantasy game.
#4 -- Grinding is not content. Content is content.

I think the big game that made this boo boo is Age of Conan. When Gaute Godager let it slip that the average Conan player will reach level 80 in 250 hours, eyebrows were raised. That would have been 3 hours per level, sans level curve distribution. So what was the player going to do in those 3+ hour sessions?

Well the answer was a big fat nothing. It seems the player was basically being asked to grind themselves silly on monsters instead of being immersed in content. This use to be an acceptable practice -- let me stress the phrase "use to be."

And let no one tell you otherwise. If people aren't having fun straight out of the gate, then they're not going to stay the distance and get to your endgame. MMOs are all about player retention, and the first hurdle you have with a new customer is getting them to stay longer than 10 minutes in your brand new game.

Endgame is important for keeping the veteran players in the game, but veteran players are people already pulled in and enjoying your product. New blood means more money and a better virtual world for all of your players. MMOs are about having fun with other people, you know.

As a side note to this, endgame players can learn much from this approach. When you have a player just entering the endgame in your awesome-sauce-guild, make sure they're having fun above anything else. Teach them slowly, show them the ropes, and practice both forgiveness and patience. Expecting someone who's new to the endgame to learn everything at once is a complete and utter lie.

If you need help with this, think about how the beginning of the game works. Then take that "tutorial" philosophy and apply it to your guild's newbie training. I think you'll find that new recruits will learn quicker, become more immersed in what you have to say, and enjoy the content with you that much more. Maybe this will lead to fewer strained vocal cords on Ventrilo? I like to think so.


Next page: And the top two things are... >>
In this article: age-of-conan, aoc, content, endgame, exclamation-points, featured, grind, joystiqfeatures, leveling, mmo-industry, top-5, top5, tutorial, world-of-warcraft, wow
All products recommended by Engadget are selected by our editorial team, independent of our parent company. Some of our stories include affiliate links. If you buy something through one of these links, we may earn an affiliate commission.
Share
Tweet
Share
Save