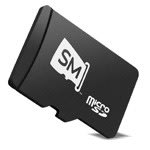 Whoa, Sharp -- wait just a minute. Did you really just introduce a pair of music systems that get down with slotMusic players? Though it's practically impossible for us to believe that such an occurrence has just, um, occurred, the 160-watt XL-DH258NH and 64-watt XL-DH228NH micro-audio systems actually do include a USB port for syncing up with SanDisk slotMusic players (along with any other USB-enabled PMP, we presume). Of course, Sharp did hedge its bets by including an iPod dock along with a universal auxiliary input, so we suppose we can't harsh on 'em too much. Both units arrive in any color you like so long as it's glossy black, and there's even an AM / FM radio, six-band equalizer and alarm clock tossed in for good measure. Catch the XL-DH258NH this June for $199.99 or the XL-DH228NH in July for $179.99.

In this article: audio, ces, ces 2009, Ces2009, ipod accessory, ipod sound system, IpodAccessory, IpodSoundSystem, micro audio system, MicroAudioSystem, music, portable audio, portableaudio, sandisk, sharp, SlotMusic, sound system, SoundSystem, XL-DH228NH, XL-DH258NH
All products recommended by Engadget are selected by our editorial team, independent of our parent company. Some of our stories include affiliate links. If you buy something through one of these links, we may earn an affiliate commission.
Share
Tweet
Share
Save