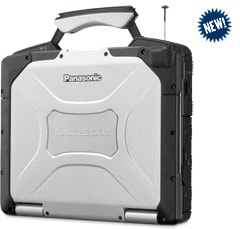 It seems like a bit of a rip-off -- if you want a laptop that won't shatter when its shiny little form slips out of your fingers as you run to your next meeting/target you have to pay a hefty premium to get something dull and durable. And, if that weren't bad enough, you then have to live with something big, boxy, and ugly. Panasonic's Toughbook line defines what many think of as a rugged laptop, but its bulk, heft, and cost give it niche appeal. It's not the only option out there for a notebook that can take a beating, though, with the semi-rugged Durabook from GammaTech offering a package that's a little more comfortable to use and, perhaps more importantly, a lot less expensive.

But, which of the two is right for you? (Assuming, of course, that either is.) Just how durable are these things? And, which one didn't fair so well in the water test? Read on to find out.
Panasonic
Toughbook

Be the first to review the Toughbook 30?
Your ratings help us make the buyer’s guide better for everyone.
Write a review


Solid. Solid and cold. Those are the things that come to mind when you first get a chance to meet a Toughbook. Its magnesium alloy exterior feels more hardened briefcase than portable computer; rough and raw compared to the smooth, brushed aluminum of a more aesthetically-minded device like a MacBook Pro. The creases in the lid make it look like something you'd expect to see feeding rounds to a 50 caliber Ma Duce, also giving it the strength to stand up to drops, bumps... and the occasional blogger standing atop it.

What's on the inside is rather less spectacular. It sports an Intel Core 2 Duo SL9300 processor cycling at 1.6GHz, a 160GB HDD (32GB SSD is an option), and anywhere between 2 - 4GB of memory (ours slots right in the middle with 3GB). On 3DMark 06 it netted a CPU score of 1,351, about a third short of the competition from GammaTech, but despite that it feels perfectly usable and responsive with its XP install. Wireless connectivity is provided through a number of means, starting with 802.11a/b/g/n WiFi, Bluetooth 2.0 + EDR, and 3G wireless via an optional Gobi WWAN chip. Also optional is GPS if you need a little help finding mid-mission waypoints -- or off-site meeting locations.

Its display is a 13.3-inch touchscreen sporting a 1024 x 768 resolution. That doesn't give an awful lot of room to work, but it is nice looking screen, blindingly bright and just as visible in sunlight as it is in a dark room. Its single-touch support almost makes up for what is one of the worst touchpads we've had the misfortune of using; small and deeply set, and while the rubberized buttons surely help to preserve the notebook's water resistance, they just don't feel good to use.

The keyboard on the other hand does feel good, sporting Chicklet style keys and a very light touch that not everyone will like, but we found more than adequate. Overall it's not an uncomfortable laptop to use on a desk, but its 8.4 pound heft makes taking it anywhere a chore (despite the incredibly handy integrated handle), its thickness (2.8-inches when closed, the bottom portion alone is 2-inches) and square edges make it a laptop you most certainly won't want to use on your lap, and the flip-down covers that hide every port make plugging in a seat of headphones or a thumb drive a little bit of a drag. Those are the penalties you must pay using one of the beefiest portables on the market.

Battery life is also beefy, advertised at around delivering a maximum of 10 hours. We didn't get there, but managed over seven hours with WiFi enabled doing normal computing tasks, and saw an impressive four hours and 15 minutes with both cores of the CPU maximized. Room for a second battery could easily have you computing for 12 hours or more in the field.


GammaTech's Durabook: the semi-rugged one

Even the Durabook's packaging looks decidedly more lightweight than the Panasonic's, bright and colorful compared to the raw cardboard you get with the Toughbook. Take out the notebook inside and it's a similar impression: a shiny, chrome logo'd, aerodynamic looking thing compared to the sandblasted block that is the competition. It too is made of a magnesium alloy, but it's much smoother here. Open it up and you're greeted with a wide, 1280 x 800 15.4-inch screen that, while a good bit larger, is also dimmer and somewhat less pleasing to the eye. It's very deep-set within the lid of this laptop, slotted behind a supposedly anti-glare protective layer. We found it to be quite the opposite, presenting plenty of reflection on this non-gloss screen. It's less usable outside than the competition, too.

Otherwise in terms of ergonomics and general usability the Durabook wins this shootout hands-down. Its 1.5-inch thickness isn't notable in most company, but here it's less than half as thick as the other, making it far more comfortable to type on -- though at 7.1 pounds it's not much lighter. The keyboard itself has a wide layout, featuring keys that have a slightly flimsy feel and a tiny little space bar, but overall is on par with the competition. This is a non-touchscreen device, so thankfully the touchpad is quite good; wider and more responsive than the Toughbook's and featuring a scrolling section on the right differentiated by a little bit of texture.

In terms of hardware the main difference between the two is the the CPU, with the Durabook offering an Intel Core 2 Duo T8300 at 2.4GHz, paired with 2GB of RAM and a 160GB hard drive. It scored a CPU score of 2,117 on 3DMark 06, quite a bit higher than the competition, and it is noticeably quicker when loading up apps, though both of these two are quick enough for your average office use. The Durabook came up just short of four hours of battery life through normal usage, which doesn't compare to the Toughbook's double-digit numbers, but is more than adequate for everyday use.

We presented the manufacturers of these two no-nonsense notebooks with a bevy of durability tests that we wanted to try, and while Panasonic's representatives were game for just about anything we suggested (even coming back with a few more brutal things to try), our Durabook contacts were understandably a little less eager. Both are rated to pass the MIL-STD-810F standards, which are a suite of tests encompassing the device's ability to operate under high temperatures, low temperatures, and resist dust -- even how susceptible its circuitry is to cause an explosions in a flammable environment. However, the Durabook is only rated as semi-rugged, vs. the fully-rugged Toughbook, so we had to go a little easier on it.

This meant that for the drop-test we were able to let the Panasonic free-fall from a height of three feet, while the GammaTech was dropped from a somewhat less realistic (in terms of likely real-world falls) one foot. Additionally the Durabook had to be off during the drop while the Toughbook was not only on but was running Disk Defragmenter. The Toughbook handled the fall like a champ, making a deafening thud and, as you can see in the video above, literally shaking the floorboards. It handled its drops with no issues at all, not crashing and not corrupting any data. The Durabook was rather less noisy when it hit, and being turned off there were no worries about data corruption, but it too handled the fall with no issues.

Crush-resistance was next, which entailed the application of 180 pounds worth of journalist to the closed lid of both notebooks. No creaks, no cracks, and no issues.

The Durabook completely sat out the cold-resistance test. We'd initially hoped to leave the Toughbook sitting on a pile of snow for a half-hour, but an early spring thaw left us looking for another option -- provided by a chest freezer that was operating a few degrees below 0 Fahrenheit. After shifting a few leftovers around we made room for the Panasonic and left it to chill for 30 minutes to no ill effect.

Finally came the most disconcerting test: water resistance. Again we had to take it easy on the Durabook, turning it completely off and pouring a small amount (100cc) of water onto the keyboard. We then had to thoroughly dry the laptop to GammaTech's test guidelines before turning it on again. It came right back up with no issue, and it seemed like everything was working -- until we tried to enter a complex password for another machine. Its keyboard now registers extra key presses, for example turning "b" into "b=" and creating other mysterious key chords. Again Panasonic was rather more brave, letting us leave the laptop on and hit it with a heavy shower from a kitchen sink sprayer. The only thing we needed to be careful about here was ensuring the ports were closed, but again it survived this challenge with flying colors -- and no keyboard flakiness.

Picking up the pieces

In the end only the Toughbook passed the tests with no issues, despite admittedly having a harder go of it than the Durabook. After we wiped the footprints off the lids of these two the only signs of duress remaining were a few very light scratches on the back, a handle that's perhaps a bit looser than before, and some big dents in the floor. The Durabook also looks none the worse for wear, though the keyboard behavior makes us think users should watch those morning cuppas. On both no data was lost, no drives corrupted, and no screens cracked. It's impressive for sure, but the bigger question for many is just how livable are these two notebooks.

Investing in a Toughbook is a serious commitment, not only thanks to its $3,000-plus pricetag, but also thanks to its heft and bulk. It's reasonably comfortable to carry around using its handle, and never having to worry about damaging it is comforting too. But, it's not something you'd want to throw in a messenger bag and sling over your shoulder, nor recline with in bed at night. In those regards the Durabook is much easier to live with, rounded angles making it comfortable on your lap and a relatively waifish profile making it far easier to slip into most standard cases. It can also be had for well under its $1,950 MSRP (we found them going for a bit over $1,600 at a few retailers), which makes it easier to pull the trigger on -- assuming you work somewhere that's generally dry.

Which is for you? The answer is neither if you covet ultraportables that are so light you'll think you forgot to take them along. Both of these two have their drawbacks, but the Durabook is the obvious choice for those who want something they won't have to wear kid gloves to use yet isn't the digital equivalent of a Hummer. (H1, naturally, not the wimpier H3). The Toughbook, on the other hand, is that uncompromisingly military-grade and beefy beast that's the natural choice for those who need to do serious computing in the field -- whether that be the sort of field frequented by the olive drab gloves of a special forces officer or muddy ones of a gardener.
In this article: durabook, durabook d15rp, DurabookD15rp, feature, featured, features, gammatech durabook, GammatechDurabook, panasonic, panasonic toughbook, panasonic toughbook 30, PanasonicToughbook, PanasonicToughbook30, review, torture, torture test, TortureTest, toughboko, toughbook, toughbook 30, Toughbook30
All products recommended by Engadget are selected by our editorial team, independent of our parent company. Some of our stories include affiliate links. If you buy something through one of these links, we may earn an affiliate commission.
Share
Tweet
Share