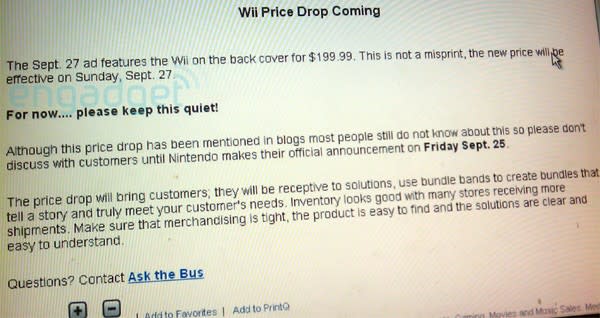 The rumors were true, and Nintendo's knight in shining armor is finally about to see its first-ever price drop. For nearly three years now, the console has sold briskly at $249.99, but beginning on September 27th at Best Buy (and everywhere else, naturally), the happy-go-lucky machine will be offered for just $199.99. Interestingly, it appears that suits at BB expect Nintendo to make an official announcement on the drop this Friday, yet retail stores won't begin selling at the discounted rate until Sunday. Something tells us that won't go over well, but we guess we've but a few days left 'til we find out exactly how the Big N plans to play this.

Update: Thanks to yet another anonymous source, we've even more proof that a $199.99 Wii is coming. A crystal clear Toys 'R Us flyer confirms the price after the break, though what's curious is the confirmation that the new price won't go into effect until Sunday, September 27th. It should be interesting to see if Nintendo really announces a price drop two days before retailers actually axe the MSRP, but with this free t-shirt that you get from TRU, we'd suggest just holding off. We mean, it's a Nintendo t-shirt!

In this article: best buy, BestBuy, breaking news, BreakingNews, console, game console, GameConsole, gaming, gaming console, GamingConsole, leak, leaked, nintendo, nintendo wii, NintendoWii, price, price drop, PriceDrop, prices, pricing, wii
All products recommended by Engadget are selected by our editorial team, independent of our parent company. Some of our stories include affiliate links. If you buy something through one of these links, we may earn an affiliate commission.
Share
Tweet
Share