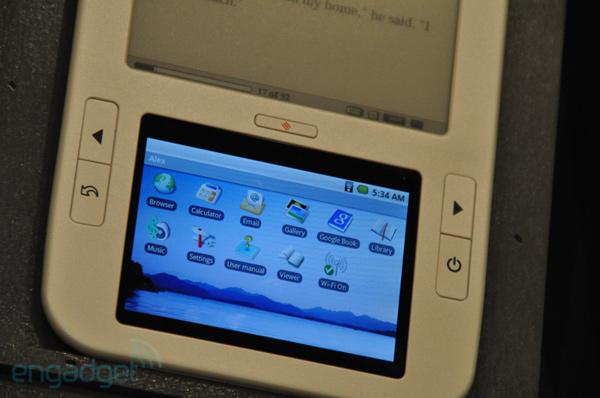 Spring Design was poised to take the official wraps off of its dual-screen, Android-based ereader this Thursday, but we were able to catch an up close and personal glance at the device today here at CES Unveiled. Highlighted over at the Marvell booth (understandable given the choice of processor), the reader was intensely thin and remarkably snappy. We had some gripes with the speed of the Nook, but every action we took on the Alex was relatively lag free. We even downloaded a book and watched it open up immediately, and the touchscreen response was also satisfactory. Spring Design also opted to expose the microSD card slot on the rear; you simple mash your card into the slot and listen for the click, and mash it once more to eject it. You better hope nothing pushes it by mistake, but hey, at least you're not stuck removing some rear cover just to swap cards. We've gotta say -- we're digging this thing based on our brief time with it, and we'd invite you to have a peek at the gallery below till our demo video is prepped.

Update: Video is after the break!

In this article: alex, armada, breaking news, BreakingNews, ces, ces 2010, Ces2010, e book, e reader, e-book reader, E-bookReader, e-reader, EBook, ebook reader, EbookReader, EReader, features, hands-on, marvell, spring design, SpringDesign
All products recommended by Engadget are selected by our editorial team, independent of our parent company. Some of our stories include affiliate links. If you buy something through one of these links, we may earn an affiliate commission.
Share
Tweet
Share