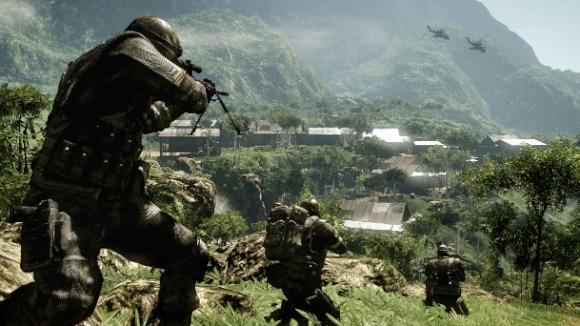 We've had extensive hands-on time with the multiplayer component of DICE's upcoming Battlefield: Bad Company sequel, but only just recently had a chance to try out the single-player campaign.

Our demo encompassed two fairly brief levels -- a jungle encampment and a battle through snow-covered mountains -- which were both set in South America. Short as they were, they gave us a taste of the ramped-up action, more challenging AI and a little bit of classic B-Company banter.

Once again assuming the role of Preston Marlow, the protagonist of the first Bad Company, we headed into a mission to track down a character who possessed intel vital to the shrouded plot. He was somewhere in or around a remote village that, as luck and level design would have it, was teeming with well-armed enemies.

We approached on foot, making our way through dense jungle foliage until we were close enough to start picking off sentries with our sniper rifle. Of course, dropping them meant their compatriots sprang into action -- but at least we'd have a few less to deal with when we strode into town. Doing so was definitely not a cakewalk; the level's design, coupled with enemies that really, truly seemed to want to survive the firefight as much as we did, made us fight for every few feet as we progressed through the close-quarters battle.

It didn't hurt our chances of survival that we had bigger, better guns and explosives -- perfect for carving a path through buildings that came apart with realistic results, courtesy of the game's enhanced Frostbite Engine. When all else failed, we'd lob a grenade into a shack and watch as its roof and walls blew out, followed shortly by any enemies who were inside. Our foes were no dummies, though, and took advantage of opportunities to whittle away at our cover with their heavy machine guns.

It began to rain about three quarters of the way through this level, one of the scripted events that added to the experience. (Exploding columns that nearly crushed us were another.)

Having gotten our man, we loaded into the second level, but this time we weren't on foot. Instead, we were manning a gun on-board a helicopter, picking off enemies below in order to clear the landing zone. Then it was an on-foot fight through a slightly more open level with some indoor action as we neared some crucial intel. A cutscene clued us in to our next objective: Finding the crash site of a satellite we'd just caused to drop out of orbit.

We fought our way on foot to a jeep, then the chase was on. One AI member of B-Company manned the jeep's turret while we drove -- but we could also launch a seemingly inexhaustible supply of grenades at the trucks and ATVs trying to force us off the road. It was a thrilling sequence, and one that could easily have been extremely frustrating had the driving controls not been as good as they were.

And that was it for our time with single-player. We liked what we played, especially the more convincing enemies and environment destruction. That, combined with the campaign trailer we kicked off this hands-on with, gave us a good feeling about where Bad Company 2 is heading.
In this article: battlefield, battlefield-bad-company, battlefield-bad-company-2, DICE, ea, ea-dice, Electronic-Arts, fps, Microsoft, Xbox-360
All products recommended by Engadget are selected by our editorial team, independent of our parent company. Some of our stories include affiliate links. If you buy something through one of these links, we may earn an affiliate commission.
Share
Tweet
Share