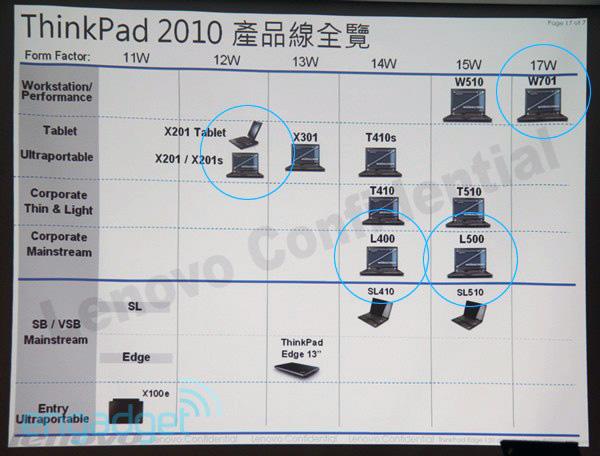 Our crack team over at Engadget Chinese has managed to snag the above roadmap slide for Lenovo's mobile computer division. We've seen earlier versions of the same slide -- when the Edge and T410 / T510 were freshly added -- but the very latest iteration contains a sprinkling of even newer machines. Most intriguing will be the L400 and L500, which are set to replace the former "corporate mainstream" mainstay R series, which incites the more hopeful among us to believe that perhaps a new chassis design is on the cards too. No less notable are the new X201 models, though we might surmise by the mild numerical change that they'll just be upgraded to low-voltage Arrandale CPUs and left well enough alone. For more info on the likely specs of the W701, you should check out our breakdown of its FCC appearance right here.

Update: In light of the X201 discovery, we've combed through our CES 2010 imagery and found a photo of an X200 with a touchpad, which was a curious thing to see when Lenovo has never sold such a creation. Our suspicion is that the X200 on display was in fact an early showing of the touchpad-enabled X201 that is soon to come. Browse past the break for the evidence.