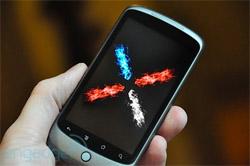 The iPhone isn't the only handset getting bumped today -- Google's just outed a very, very significant update to the Nexus One that includes Google Goggles on board and a re-upped version of Google Maps that includes suggestions and a dedicated night mode. Much more significantly, though, they've capitulated and enabled multitouch in Browser, Gallery, and Maps -- great news and a big win for the Android community at large. Finally, there are some 3G improvements in there, but you might have to wait a bit -- Google expects to have it rolled out to pretty much everyone toward the end of the week. Seriously though, now that we've gotten that whole multitouch spat cleared up, it's time for Engadget to rally around something else: ridding the world of tiny ninjas, perhaps? Follow the break for a video of the new firmware -- in all its multi-fingered glory -- in action!

Update: ReadWriteWeb's gotten an official statement from Google on the question on everyone's mind: why now? The company says that Android 2.1 "powers a new class of devices" with more horsepower and bigger displays, and "based on these new capabilities and numerous requests from Android users, we decided to provide pinch-to-zoom capabilities with this new over-the-air software update for Nexus One devices." This sounds like a total cop-out to us -- HTC got multitouch working just fine on the Hero way back on 1.5 -- so we still think they just got uncomfortable with the noise surrounding the groundswell of demand for it. Of course, that's fine by us -- power to the people, right?

In this article: android, android 2.1, Android2.1, breaking news, BreakingNews, google, multitouch, nexus one, NexusOne, pinch to zoom, pinch-to-zoom, PinchToZoom, software, update, upgrade
All products recommended by Engadget are selected by our editorial team, independent of our parent company. Some of our stories include affiliate links. If you buy something through one of these links, we may earn an affiliate commission.
Share
Tweet
Share