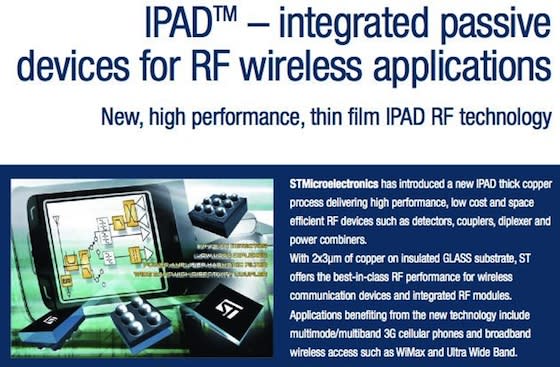 While Apple appears to be the rightful owner the iPad trademark for the U.S., there's a bit of a problem in the E.U. A French-Italian company, STMicroelectronics, currently owns the rights to "iPad" in two different classifications -- "electronics and components" and "using the name in print." ST has held the trademark since September 14, 2001, but it is set to expire on September 1, 2010.

So what does ST intend to do? Possibly try to get Apple as a customer in return for trademark rights. The president and CEO of STMicroelectronics, Carlo Bozotti, is currently meeting with customers in Taipei, and when asked if the company would make some sort of deal with Apple, he replied "Our ambition is to have a great customer named Apple."

It's a possibility. The existing ST iPad (Integrated Passive and Active Devices) trademark covers chipsets for cell phone manufacturers, so Apple could theoretically use the company's products in future devices. Apple's other choices could include paying ST a license fee for rights to use the trademark, or legal action to gain rights to the name.

This isn't Apple's first run-in with trademark difficulties. The day after the iPhone was announced in 2007, Cisco sued Apple for infringing on the iPhone trademark name. The two companies eventually came to an agreement and both use the term iPhone for their products.
In this article: apple, EU, iPad, legal, STMicroelectronics, trademark, trademark infringement, TrademarkInfringement
All products recommended by Engadget are selected by our editorial team, independent of our parent company. Some of our stories include affiliate links. If you buy something through one of these links, we may earn an affiliate commission.
Share
Tweet
Share