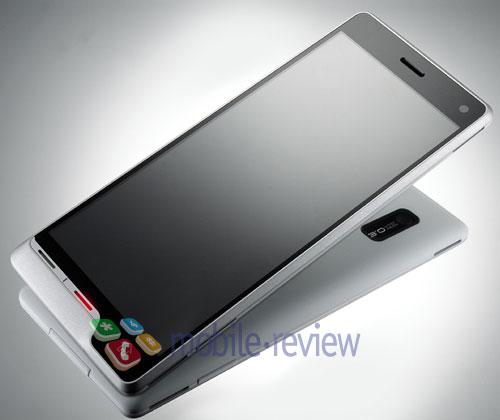 The iF Design Awards won't officially be handed out until the big ceremony at CeBIT next month, but some of the winners have now already been announced, and they include a few surprises. One of those is this new Qisda QCM-330 smartphone, which is said to be Android-based, and packs a 4-inch, 1,280 x 1,024 screen (supposedly, although the actual resolution will likely differ given the aspect ratio), WiFi and HSDPA connectivity, a 3 megapixel camera, and an accelerometer, among other, as yet unnamed specs. It's joined by the LG GD880 we previously spotted in the wild, along with a slew of phones headed for Vodafone, including the Compass slider, and the Krystal (pictured after the break), which apparently packs displays on both sides and some augmented reality-type features (like on the fly translation of newspapers). Rounding out the lot are the decidedly more ordinary Vodafone Sting, Shilpa, Quincy and, our personal favorite, the Larry. Hit up the link below for a closer look at those.

In this article: compass, gd880, if, if design award, if design awards, IfDesignAward, IfDesignAwards, krystal, larry, lg gd880, LgGd880, qcm-300, qisda, qisda qcm-330, QisdaQcm-330, quincy, shilpa, sting, vodafone
All products recommended by Engadget are selected by our editorial team, independent of our parent company. Some of our stories include affiliate links. If you buy something through one of these links, we may earn an affiliate commission.
Share
Tweet
Share