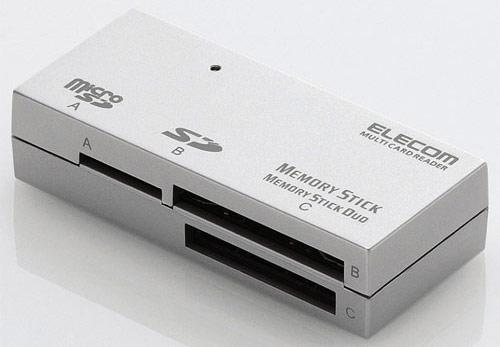 Panasonic's duo of SDXC cards should be shipping out this month, which means that you'll be needing a new card reader on the double. Of course, it's not like you're really about to pay upwards of $450 for 32GB of wicked fast Secure Digital storage (or $600 for the 64 gigger), but hey, it's hard to knock Elecom for being proactive. Said outfit has just released what looks to be the first multicard readers to openly support SDXC, with the MR-A001BK handling ten formats and the MR-A002 supporting a grand total of 32 -- some of which haven't been used regularly since Vikings ruled the north. Both are expected to ship in Japan later this month, with pricing set for ¥1,890 ($21) and ¥2,415 ($27) in order of mention.
In this article: accessory, card reader, CardReader, eleco, flash, flash card reader, FlashCardReader, japan, japanese, memory, memory card, MemoryCard, MR-A001BK, MR-A002, multicard reader, MulticardReader, reader, SDXC
All products recommended by Engadget are selected by our editorial team, independent of our parent company. Some of our stories include affiliate links. If you buy something through one of these links, we may earn an affiliate commission.
Share
Tweet
Share