Microsoft Word can now transcribe your conversations on the web 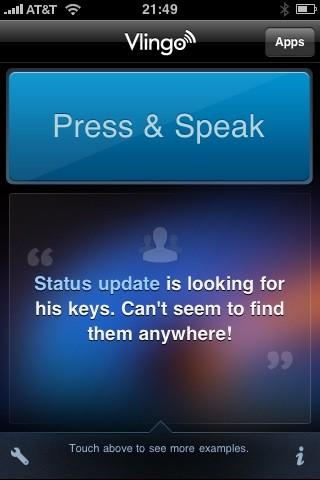 In the burgeoning market for iPhone voice recognition apps, the free Dragon Dictate clearly holds the top spot. In fact, this paragraph was dictated using DragonDictate (with some minor edits after the fact). However, the application doesn't always shine when it comes to getting your text quickly and easily into different places where you might want to use it. You can send an e-mail or a text message if you want to, but you can't update your Facebook status or send a Twitter message without copying and pasting. Performing a search requires an entirely separate app.

To make your dictation process easier -- at least when it comes to getting your text to go where you want, when you want -- there's the latest update to the Vlingo app, which we first reviewed last June. Vlingo 2.0 is trying to up the ante for text recognition by putting all the 'next step' options in one convenient place.

You can search (Google, Yahoo, or Bing), find map items, dial your contacts (with optional contact name upload to Vlingo's servers to improve recognition) and update your Facebook or Twitter status. For email or SMS, you have two in-app purchase options to extend the free app's capabilities; it's $6.99 for either SMS or email action, $9.99 for both.

Vlingo has gotten a thorough UI overhaul in this new version, and it's quite a bit easier to use than it was. The dictation button can be used in hold-down or tap-to-talk mode, and the app can be set to recognize speech on launch for maximum speed. You can specify what action you want by speaking it: "Email Joey, Subject how about some coffee, Message Got time to meet me at Starbucks? You're buying!" will create and address an outgoing email for you, all in one step.

That one-stop-shopping for creating emails is definitely more streamlined than Dragon's implementation, and it also exposes one of Vlingo's handiest features: a record button in the confirmation/edit screen for each of the destinations, allowing you to append or insert new dictation where you need it. Important safety note: while Vlingo isn't intended for use while driving or during other attention-critical tasks, it's probably less distracting to speak a few sentences than it is to type them.

Unfortunately, there are one or two drawbacks to the Vlingo fandango. First, there isn't a raw 'notepad' mode, where you can simply dictate text with the intention of copying it to another app. Of course, if you have the $6.99 email module, you can use that for free text entry, but in the free app there's no direct way to do it except by speaking a Facebook update and then copying instead of sending it (which works fine, by the way).

The good news is, the base app is free, and it's worth a try to see if it meets your needs as well or better than the Dragon suite, Siri or any of the other voice apps. I'm not sure the email or SMS buy-ups are as good a deal, but that will depend on your individual needs and usage profile.

TUAW is commonly provided with not-for-resale licenses or promo codes to permit product evaluations and reviews. For more details, see our policy page.

In this article: dictation, dragon, vlingo, voice recognition, VoiceRecognition
All products recommended by Engadget are selected by our editorial team, independent of our parent company. Some of our stories include affiliate links. If you buy something through one of these links, we may earn an affiliate commission.
Share
Tweet
Share