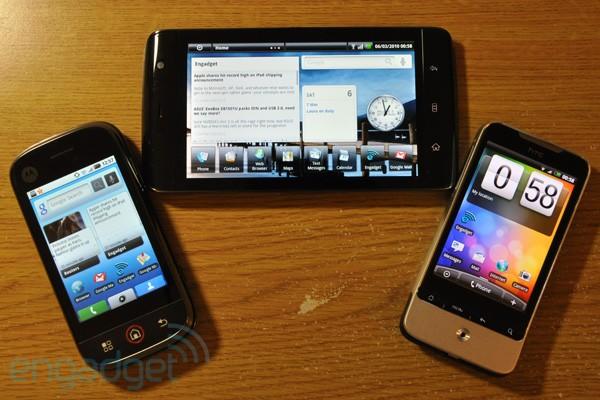 My friend and colleague Harry McCracken recently bought a brand new Droid from Motorola. He says it's a "loaf of day old bread." He's right. The Droid and Android 2.0 were introduced with much fanfare in December, but have already been eclipsed by Android 2.1 running on Google's Nexus One, and there are some serious ramifications for being behind. For example, Google recently touted the latest mobile version of Google Earth, which is a cool app that you won't be able to use unless you're running 2.1. Sure, Google says "Google Earth will be available in Android Market on most devices that have Android 2.1 or later versions," but that's most, not every. And what does Google mean when it says "as devices like the Droid get updated..." to 2.1? When will they get updated? Is it any wonder that some Android users are starting to get pangs of buyers remorse?

When Android was announced, I wrote that if "Google can deliver, the impact could be huge," but I caveated a major issue: Google would need to prevent the market from fragmenting and allow it to succeed where other mobile and desktop Linux implementations had failed. Linux fragmentation remains one of the many reasons the open-source OS has failed to capture a meaningful share of the PC desktop market, and Android is rapidly following a similar path by fragmenting into different versions with different core feature sets, different users experiences and run different applications.

It's not even clear what's part of the official Android distribution and what's been layered on by manufacturers to differentiate their phones. For example, the Droid runs a mostly stock version of Android 2.0 and partially supports Exchange Active Sync, a critical feature for business users. The Nexus One runs a stock version of Android 2.1, and has far more limited Exchange support with no ability to sync calendars. Other

vendors like HTC have taken great pains to customize their devices with an added layer of interface customizations like Sense to both differentiate and simplify their devices, as well as implement missing features -- like full Exchange support. The problem is users of devices running Sense (or Motorola's Blur) find themselves stuck on older Android releases such as 1.5 or 1.6, which lack newer core features like Google Maps Navigation.

I know that last weekend at least one Android enthusiast site reported that Google has promised to get 2.1 on every Android device. Well, that's all well and good and smiles and rainbows, but an unverified blog post from some Android enthusiasts isn't exactly canon to me. Are there hardware issues that will prevent 2.1 running on older devices? Screen resolutions? I recently tried to install one of the few good Android games and found it won't work on Nexus One as it has a nonstandard screen resolution. This isn't just about older devices either -- many new devices were announced at Mobile World Congress running either Android 1.5 or 1.6. When does it end? Either Google addresses the fragmentation issue immediately or it will find that Android suffers the same fate as Linux on the desktop.

Michael Gartenberg is a partner at Altimeter Group. His weblog can be found at gartenblog.net. Contact him at gartenberg AT gmail DOT com. Views expressed here are his own.
In this article: android, android fragmentation, AndroidFragmentation, column, columns, fragmentation, google, htc
All products recommended by Engadget are selected by our editorial team, independent of our parent company. Some of our stories include affiliate links. If you buy something through one of these links, we may earn an affiliate commission.
Share
Tweet
Share