V. Savov
March 16th, 2010
In this article: 802.11n, a70z, aio, all in one, all-in-one, AllInOne, computer, core 2 duo, Core2Duo, desktop, lenovo, lenovo thinkcentre, lenovo thinkcentre a70z, LenovoThinkcentre, LenovoThinkcentreA70z, review, thinkcentre, thinkcentre a70z, ThinkcentreA70z, thinkvantage, video, windows 7, Windows7
The hallowed Think branding finally spread out to the land of AIOs earlier this year and we just had to wrap our paws around some of that signature matte black plastic to see what's what. The ThinkCentre A70z represents Lenovo's most direct assault on the eco-conscious office manager's checkbook, coming as it does with minimal packaging, built out of recycled and recyclable materials, and significant energy savings relative to orthodox desktops. In our time with it, we found the A70z to be a well built and capable little rig, but the question you most probably want answered is whether the premium branding we associate with the tank-like ThinkPads can be trusted to deliver a similar superiority in hardware and construction in the all-in-one arena. Click past the break for the answer.%Gallery-88173%
Lenovo 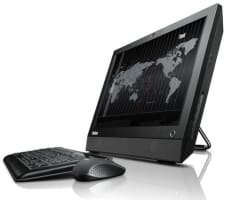 There's a mock infomercial from Lenovo floating about on the interwebs that claims the A70z can be taken "from box to boot" in under three minutes. While we couldn't reach quite such a velocity in our unboxing, it is undeniable that setting up this all-in-one is a cinch. With so few accessories and paperwork to deal with, it's simply a matter of whipping out the machine, strapping the provided batteries into the keyboard and mouse, plugging in the power cable, and hitting the "on" button. The only snag we ran into was that we couldn't find the minuscule wireless receiver for the input peripherals, whose position wasn't well documented. It was tucked away in a compartment inside the mouse, which gets a plus for neatness and storage, but a minus for the unintuitive placement. Aside from that minor issue, the setup here is comparable to that of a laptop or a phone -- gone are the days of wrestling with a jungle of wiring behind and under your desk just to get everything hooked up.

A quick note of commendation must go to Lenovo's packaging here, which comes with an emphasis on minimalism but retains a healthy space between the hardware and the external surface of the box, making it both functional and environmentally friendly.

Both visual and physical inspections revealed no flaws in the A70z. No untoward noises, no poorly molded plastic, no dead pixels. It inspires confidence that it'll last for quite a long time and does not seem to have any structural frailties. Compatible with standard VESA wall mounts and featuring a Kensington lock on the back, it offers us hints of its business-friendly orientation. The copper heatsink up top is well positioned -- it allows heat from the CPU to escape straight out of the top of the case without warming up other components unnecessarily. Another good use of metal is in the kickstand at the back, though that probably should also have extended to the machine's carry handle, which is unfortunately all plastic. That's not to say it's flimsy, just that it doesn't feel as reassuring as it perhaps ought to do. Still, this is as portable a desktop computer as you can ask for, and it's certainly light enough to transport with ease.

One of the bigger sales points of the A70z is what Lenovo claims to be easily accessible and upgradeable hard drive and memory modules, but with two screws to remove the back cover and five required for the removal of the HDD, we'd say this is on the harder side of easy. That the option is there is indubitably a good thing, but Lenovo's ThinkCentre desktops are known for their toolless access chassis and it's ever so slightly disappointing that the A70z does not match up on that front.

The stand isn't quite as easy to operate as Lenovo's claim that you can tilt the machine back and forth with just one hand, but it does provide reliable support at most angles. This is quite important as, by virtue of its design, the A70z already lacks in positional versatility, so what little tilt functionality it offers has to be done well. We're happy to report that that's the case. One note of a more esoteric nature relates to the machine's physical stability. There are many monitors nowadays that come with insufficiently wide stands (Samsung's Pebble series are among the worst offenders), which leads to them being extremely sensitive to any movements of the desktop beneath them. The A70z shines here, as you might expect given that its body rests directly on the desk, and deserves kudos for being so unshakable in the face of the daily rigors a work surface might have to withstand.

Moving to the bundled wireless keyboard and mouse, we've got our reservations about both. While the keyboard is by no means terrible, the shallow travel of the keys and the dull, indeterminate keystroke sound do not lend themselves to a great typing experience. Furthermore, there's significant flex around the K and L keys on the right side, which might be forgiven given the emphasis on the keyboard being "ultra slim." All we'd say on the matter is that Logitech do similar models with no greater girth that provide a far better experience. So there's room for improvement with the keyboard and the same, regrettably, can be said of the mouse. While its top surface is coated in a pleasing matte finish, it's the very size of the peripheral that caused us most bother. It's a strange choice on Lenovo's part to bundle something designed to fit into laptop backpacks with a product in its business-focused ThinkCentre range. Maybe it's just our big hands, but the ergonomics felt wrong and we'd have appreciated a grown up mouse to go along with the grown up computing that we'd want to do on a business machine.

The software on this baby is Windows 7, the Professional 32-bit variety. Should you truly need any more enlightenment on the topic of this OS, hit up our review right here, but suffice it to say it's everything you'd expect from a machine sporting Microsoft's latest and greatest. Lenovo probably earns most credit here with an omission: there is very little in the way of bloatware to slow the computer (and your progression to getting productive on it) down. Sure, there's the ThinkVantage suite of software tools that offers dubious value -- we didn't have occasion to use it and felt that in all circumstances there were better ways to achieve the goals it aims to streamline -- but that doesn't hamper the user experience.

Lenovo's big pledge on the performance front relates to a 35-second boot time -- something we verified for ourselves and can confirm is accurate. In the video below we neglected to note that we installed the auto-starting Skype on the A70z, which probably contributed to the 37-second boot we got. In any case, the lack of labor associated with cables on the outside extends to the user experience as you won't need to modify anything internally as you might have to do with less scrupulous, trialware-peddling vendors.

Equipped with a 2.93GHz Core 2 Duo E7500 and 2GB of RAM, our review unit was perfectly capable of chewing through the things we threw at it. This point probably needs to be stressed a little, as Intel's C2D line of desktop parts is still extremely competent, in spite of the Core 2010 generation taking over in mind and market share alike. We ran a pair of 1080p YouTube videos simultaneously without causing the A70z much strain, and Photoshop work was carried out with little effort again. Given the fact that the targeted business user is mostly looking at Excel spreadsheets and Outlook contacts, this might even be overpowered. We'd still prefer a higher resolution than the 1440 x 900 pixels on offer in the A70z, and probably 4GB of the random-access stuff (the option exists if you care to pay a little more) for when we get a bit carried away with our browser tabs, but there's little else to fault in the spec of this system.

Quite naturally, 3D gaming is completely out of the question, given the integrated Intel GMA X4500 graphics, but that's the one sacrifice you have to expect to make when moving to this form factor. In our view, it's better to completely dismiss the ephemera of gaming than to include an underpowered mobile part as some other machines do, which mostly just misleads optimistic consumers who might expect they'll be able to get their Modern Warfare on while using their space-saving new rig.


If it hasn't emerged already, the theme of our experience with the A70z was a singular one of competency. It did what we expected it to do, it contained no nasty surprises, but it also didn't bowl us over with anything particularly special. The unit we reviewed is on sale now for around $797 in the US or £611 in the UK, which is a fair bit more than you'd need to spend if you put all the components together yourself. Of course, a premium is to be expected for the comparatively slender profile and the concordant simplification of both setup process and use, but the question we started off with was whether this machine justified receiving the ThinkCentre branding. We can't help but conclude that it just doesn't do enough to merit that mark of excellence. Its construction, attention to detail, and rigorous quality checks are certainly right up there -- that much is readily apparent -- but the omission of a higher resolution display panel, the requirement for tools when accessing memory and hard drive upgrades, and the unsuitable input peripherals place it just a notch below what we might expect from the former IBM brand. All the same, if you ignore who made it and what's it called and just focus on what the A70z is, you'll find one of the better all-in-ones around. Not the best, but better than most.
All products recommended by Engadget are selected by our editorial team, independent of our parent company. Some of our stories include affiliate links. If you buy something through one of these links, we may earn an affiliate commission.