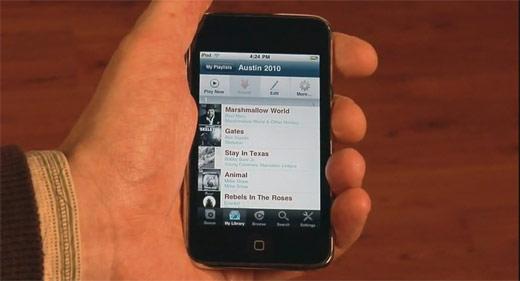 While we all wait patiently for Apple to concoct its own subscription-based, unlimited music streaming service (hello, Lala acquisition!), MOG is jumping on the opportunity right away. Er, almost right away. Down in Austin this week, the company announced that an iPhone and Android app would be out "in early Q2" in order to bring unlimited music streaming to both operating systems for $10 per month. We're told that a catalog of seven million songs will be available, but there's no way to know if 6.99 million are of the "no one cares" variety. At any rate, your monthly fee will also allow unlimited streaming from the desktop, but alas, you'll be left with nothing but hollow memories should you ever stop ponying up. In related news, Rhapsody has announced (video after the break) that offline playback support is coming to the iPhone, with the updated app expected to be passed along for Apple's confirmation "shortly." Granted, the Rhapsody to Go subscription is $5 per month more than MOG's option, but with all this competition popping up, we wouldn't be shocked to see that slide lower in due time.

See more video at our hub!
In this article: All Access, AllAccess, android, apple, audio, digital downloads, DigitalDownloads, google, iphone, lala, MOG, MOG All Access, MogAllAccess, music, Rhapsody, Rhapsody to go, RhapsodyToGo, stream, streaming, streaming music, StreamingMusic, SXSW, SXSW 2010, Sxsw2010, unlimited
All products recommended by Engadget are selected by our editorial team, independent of our parent company. Some of our stories include affiliate links. If you buy something through one of these links, we may earn an affiliate commission.
Share
Tweet
Share