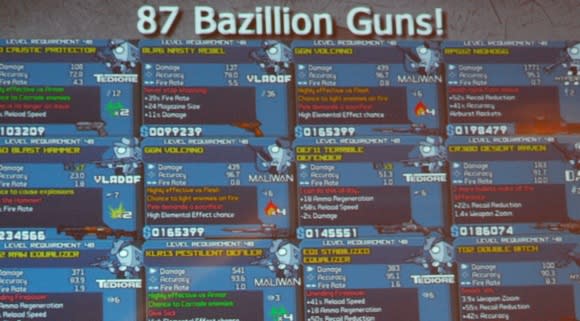 Fact: there are 16,164,886 guns in Borderlands according to Gearbox Software developers Matthew Armstrong and Jimmy Sieben. That's a lot of guns. Remember that scene in The Matrix where Neo says "Guns. Lots and lots of guns."? It's a lot more than that. That's also the number of guns before the DLC, which has inflated it even further. So how do you have someone design each one of those firearms and build out the specs? Even if you only paid 25 cents per gun, that would still chew into your development budget to the tune of over four million dollars. So what do you do, hotshot?

Easy! You make a system that does it all for you. In an SXSW panel, Sieben and Armstrong spoke about the systemic development tool named Gearbuilder that they developed, going into detail about how they created the system to handle the creation of that many customized guns. It generates the guns based on one of 12 different manufacturers, giving each one a different grip, body, cylinder, barrel and accessories. Based on those, that same system determines how much damage the gun will deal. But what's surprising is, as impressive a figure as 16 million is, it's still only one gun. Shoot on through the break for more.


Let's say the shotgun is the base weapon, and you want to turn that into a sniper rifle. You just elongate the barrel, change the look of the cylinder and grip, say that it only takes one shot and then modify what type of damage it deals right in the system, all without talking to a programmer. Voila! It's a new gun. Thus using a system like this can produce a shotgun with a scope on it, which is something you'd never use in real life, but according to Armstrong, "In the world of Borderlands, we can kind of get away with that.

Since you can also level up the guns in Borderlands, the system also builds the guns on one formula: if the gun is balanced at level one, and balanced at level 50, then it's balanced at every level inbetween. So using the system to both build and balance the weapons saved the developers a ton of time, and considerable grief. Even though the system can generate millions of different weapons, Armstrong said the system was intended to connect you to a specific gun, and players will tend to carry that the same weapon throughout the game.

Some users have called this a flaw, stating that even though they play the game through multiple times, when a boss drops a good weapon, they have to choose whether to keep the weapon they already have or move on to something new. "That's by intent. I want you to be attached to your gun. A lot of people who have played the game multiple times think that's a flaw, but then I point out that they've played the game multiple times." Another advantage of using this system to streamline the weapon creation process is that they didn't start working on the DLC until the entire game was finished.

Gearbox is also considering using the system for other games, although they said it won't be in Aliens: Colonial Marines, which the company is developing. Which is a relief, because we don't really need 16 million variations on Colonial Marine weapons, do we? On second thought ...

In this article: Aliens-Colonial-Marines, Borderlands, gearbox-software, Jimmy-Sieben, matthew-armstrong, Microsoft, sxsw-2010, Sxsw2010, weapons, Xbox-360
All products recommended by Engadget are selected by our editorial team, independent of our parent company. Some of our stories include affiliate links. If you buy something through one of these links, we may earn an affiliate commission.
Share
Tweet
Share