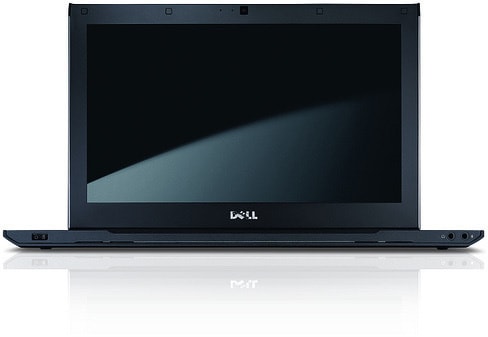 What if we told you there was a way to have the svelteness and power of Dell's $1,500 Adamo for less than half the price? You'd be interested, right? That's exactly why we've been trying to get a Dell Vostro V13 in-hand since its launch a few months ago. Besides starting at $449 – our unit's configuration rings up at a higher $844 -- the less-than-an-inch-thick, aluminum clad Vostro V13 promises five hours of battery life and good-enough everyday performance. Sure, it was created for small business types, but its blend of style, performance and price had us convinced that it could be the best ULV laptop out there. Ah, but is it? We'll tell you everything you want to know after the jump in our full review. How would you rate the Vostro V13?
We want to hear what you think. Post a quick review now to join the conversation!
Write a review

No matter how you look at the Vostro V13, it's clear that it inherited its handsomeness from the flashier Dell Adamo – its screen lays on top of the bottom deck and its bottom is enclosed with a solid piece of aluminum. Though you won't find the Adamo's glossy lid or silver trim, the V13's brushed aluminum, champagne colored lid has a more understated business look that we actually prefer. Like the Adamo, most of the ports – a USB, a combo eSATA/USB, Ethernet and VGA – lie on the back edge. The right side makes room for an SD and an ExpressCard/34 slot, but that's all you'll find along the slim, flared edges. The front edge is home to its mic and headphone jacks.

We're most impressed with the .65-inch V13's thin bod, and after doing some comparison, we've determined it's the thinnest budget CULV lappie out there – the ASUS UL50Vf is an inch thick and the Acer Timeline 1.1-inches. The 3.5-pound chassis is also lighter than the 4-pound Adamo, and it's easy to tote from the desk to the couch with just a hand. Still the V13 feels incredibly solid, and its build quality is remarkable for the price -- the entire casing along with its reinforced zinc hinges are as rigid as it gets.

In what is obviously a cost saving move, Dell hasn't extended the aluminum casing under the lid, and instead the deck is covered in black, matte plastic. The full size keyboard, while comfortable to our digits, has a bit too much bounce and flex to it. We should also mention that we happen to like the clickyness of the keys, but those that prefer a quieter typing experience may not dig the V13's typing experience. Honestly though, it would be hard for a ULV laptop's keyboard to best that on the Lenovo ThinkPad Edge 13 -- we're still madly in love with it.

For the first time in a long time, we don't have absolutely horrible things to say to a touchpad. The pad itself is quite spacious, and though the dedicated right and left mouse buttons are a bit mushy, they are absolutely tolerable. Even more surprising is that multitouch gestures were decently responsive – two finger scrolling was smooth as was pinching to zoom. Can we get a Hallelujah!?

The V13 has one of the nicest screens we've seen on a budget laptop. The 1,366 x 768-resolution, 13.3-inch matte display doesn't kick back any glare, and the horizontal viewing angles were quite good when watching Desperate Housewives on Hulu. Vertical angles are a bit worse – when we titled the screen backwards we lost some of the brighter coloring. Regardless, we much prefer it to the glossy screen on Lenovo ThinkPad Edge 13 and the ASUS UL50Vf.

Like most ULV laptops, the V13 isn't a powerhouse, but it definitely holds its own for the basic productivity chores and Web browsing. Our unit was configured on the higher end with a 1.3GHz Intel Core 2 Duo S7300 processor, 7,200rpm 320GB hard drive and 4GB of RAM, all of which provided acceptable performance for simultaneously writing this review in Microsoft Word 2007, toggling between tabs in Firefox and listening to Lady Antebellum's new album in iTunes -- hold the judgment, please. We expect going down to 2GB of RAM or using the lower end Celeron / Intel Core 2 Solo processors will diminish performance a bit, but it will knock you into a $600 price bracket and we suspect that performance would still be good enough for basic activities. On the graphics front, it still uses Intel's GMA 4500MHD -- so while it could handle 720p and 1080p videos, it's going to have nothing on the NVIDIA GT335M-equipped Alienware M11x when it comes to 3D gaming.

Battery life is where the Vostro V13 comes to a screeching halt. On our video rundown test the V13's six-cell, 30Wh battery lasted only 2 hours and 39 minutes with brightness set to 65 percent. That's more than half the runtime of the ASUS UL50Vf. Even worse is that because of its solid aluminum build the battery cannot be swapped out. There's really no good news when it comes to battery life here -- the reality is that you'll spend more of your time looking for an outlet with this ULV than others out there. Because it's a small business laptop, Dell bundles the V13 with its own BackUp and Recovery software, but other than that the desktop arrived quite clean.

The Vostro V13 -- or what we have taken to calling the poor man's Adamo -- has us all torn. Its thin and sturdy design (the very thing we love so much about it) is what causes its unacceptable battery life and the inability to swap out the cell yourself. When it comes to budget ULV laptops, the Vostro V13 is the best choice out there when it comes to thinness and design, but for those that put more value on battery life (and graphics for that matter) we have to recommend the ASUS UL50Vf. Good luck convincing yourself to forget about this form factor, though.
In this article: culv, dell, Dell Vostro, dell vostro v13, DellVostro, DellVostroV13, laptop, laptops, review, ultraportable, ulv, v13, vostro, vostro v13, VostroV13
All products recommended by Engadget are selected by our editorial team, independent of our parent company. Some of our stories include affiliate links. If you buy something through one of these links, we may earn an affiliate commission.
Share
Tweet
Share